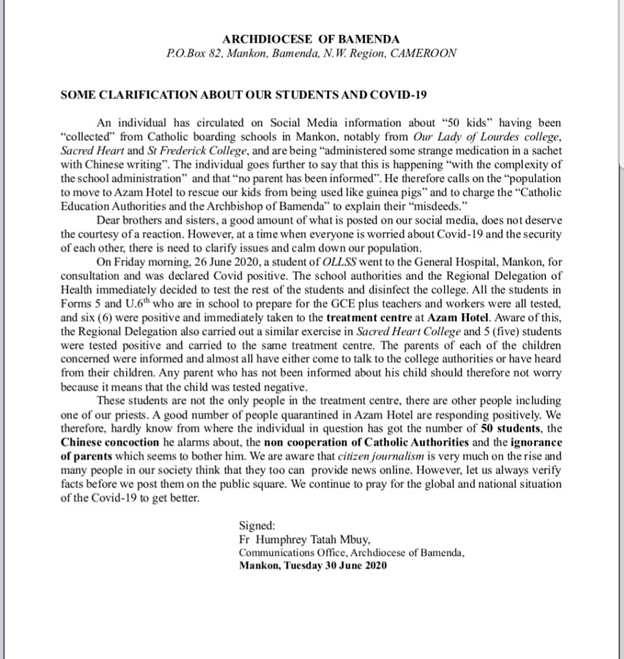 On June 30, 2020, a message that went viral from unknown persons alleged that around fifty students from certain Catholic schools in Bamenda were discreetly taken from school to the Azam hotel at Mile 90 and quarantined with a strange drug administered to them. DataCameroon after a thorough verification says otherwise.

Azam Hotel is known as the Regional Hospital Bamenda Annex or the quarantine center where patients with mild symptoms related to COVID19 are kept for follow up on treatment control. Sacred heart Mankon, Our Lady of Lourdes Secondary School Mankon and St. Frederick are all Catholic owned secondary and high schools within the Bamenda two sub-division which were targeted in the surfers write-up which reads; “Alert!Alert!Alert!…..Something strange being done  to some of our kids in the boarding schools of Sacred Heart College, St Frederick(former PCC), and Our Lady of Lourdes with the complicity of the school administration. They collected about 50 kids from these three schools at nite about two days ago and took them to Azam hotel in Ntaturu Mankon (around Bali park). They have been put 2 each in a room and fed well BUT are administered some strange medication in a sachet with Chinese writing on the sachets. No parent is informed and the authorities (???) keeping the children hostage in this Azam hotel are keeping sealed lips on why the children are there. The school authorities too are not cooperating with worried parents to explain what is going on with children supposed to be under their care. Our population should move to Azam hotel to rescue our lids being used as guinea pigs and the people should hold these school authorities to explain these misdeeds. Catholic Education Authorities and the Arch bishop of Bamenda should explain. Spread this news worldwide to humsn rights groups, who, local and international Organizations. More later.” 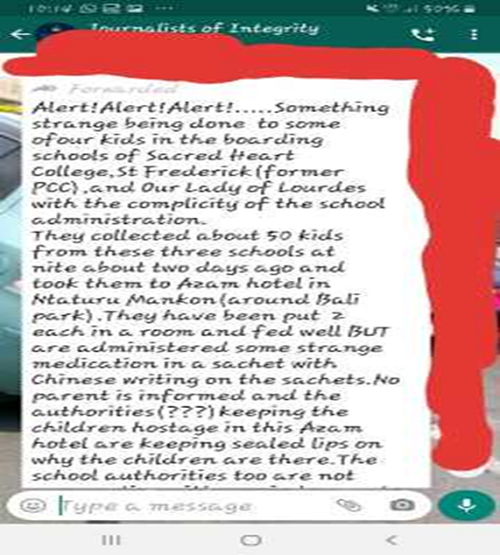 This message on the said day made turns on private boxes on whatsapp and groups such as “Journalists of intergrity”.

Reaction from the Communication office of the Archdiocese of Bamenda

In a bid to clarify the population on the message that had circulated in order not to create panic given that the Region is fighting a dual crisis, the Communication office of the Archdiocese of Bamenda issued a communiqué clarifying the false alarm raised in the Whatsapp message.

Communiqué from the Communications office, Archdiocese of Bamenda

According to the Communique dated Tuesday June 30th, made public by Fr Humphrey Tatah Mbuy, of the Communications Office of the Archdiocese of Bamenda, he draws the attention of the public that “a good amount of what is posted on social media, does not deserve the courtesy of a reaction. However, at a time when everyone is worried about Covid-19 and the security of each other, there is need to clarify issues and calm down our population”, he said.

The Communique further recounts that on Friday morning, 26 June 2020; a student of OLLSS went to the General Hospital, Mankon, for consultation and was declared Covid positive. The school authorities and the Regional Delegation of Health immediately decided to test the rest of the students and disinfect the college. All the students in Forms 5 and U.6th who are in school to prepare for the GCE plus teachers and workers were all tested, and six (6) were positive and immediately taken to the treatment centre at Azam Hotel.

Aware of this, the Regional Delegation also carried out a similar exercise in Sacred Heart College and 5 (five) students were tested positive and carried to the same treatment centre. The parents of each of the children concerned were informed and almost all have either come to talk to the college authorities or have heard from their children. Any parent who has not been informed about his child should therefore not worry because it means that the child was tested negative.

We are equally informed by the communiqué that these students are not the only people in the treatment centre, there are other people including a priest and that a good number of people quarantined in Azam Hotel are responding positively.” We therefore, hardly know from where the individual in question has got the number of 50 students, the Chinese concoction he alarms about, the non-co-operation of Catholic Authorities and the ignorance of parents which seems to bother him. We are aware that citizen journalism is very much on the rise and many people in our society think that they too can provide news online. However, let us always verify facts before we post them on the public square. We continue to pray for the global and national situation of the Covid-19 to get better.” the communiqué furthered.

Talking to the Director of the Regional hospital Bamenda, Dr. Nsame Denis who is head of the Testing, Diagnosis and Treatment section on the Incident Commend System, he affirms that these students are at the quarantine center and are receiving treatment and are responding very well and some of the boys have been engaged in football playing at the center since it is not a prison. He reiterated that the immune system of the younger generation is stronger reason why we can hardly here of youths dying from Covid.

The new examination calendar signed by the Minister of Secondary Education sets the practical sessions of the GCE Ordinary and Advanced Level between July 20 to August 5 while the written session on its part will run from August 5-25, which means these students would’ve been out from the quarantine center depending on their results from their first and second controls.

DataCameroon in a phone call interview with the Regional Delegate for secondary Education for the Northwest Region, Mr. Ngwang Roland Yuven sought to find out what measures has been taken should other students be tested positive and are quarantined during Examination period, how will they write the exams? To this the Delegate said with regards to COVID and the end of course examinations, they are waiting on the Ministry to issue clear guidelines and strict protocol which is going to be respected. He further revealed that at the Regional level, task force and Focal points have been positioned in schools to monitor the health of students not just for COVID but for any other ailment. Once a student feels unwell, he or she is immediately taken care of at the nearest district, he concluded.

Info-demic in the Era of CoV-19

Since the outbreak of the novel corona virus, there has been a lot of misinformation about the virus and health establishments as well as its personnel where testing is being carried out. This has caused many to shy away from visiting health establishments leading to more community deaths. According to reports most people prefer to visit medicine stores in the quarters if they feel unwell or call their doctors for online consultation. In some cases, most patients come at very critical stage and may either die upon arrival or die during commencement of their treatment. It is therefore important that the population shun fake news and rumor and adhere to the right information. Doctors’ advice that if unwell, It is better to get tested so that if positive treatment can commence early enough to avoid getting to the severe stage. The Ministry of Public health on their Facebook Page on July 1st while giving the Regional epidemiological situation on COVID for the Northwest, called on every one to shun stigmatization and spread of FAKE NEWS about any health facility involved in COVID-19 treatment indicating that it will only lead to more contamination and more deaths from COVID-19 in the North West Region.

As of July 7th, the Epidemiological situation in the Northwest Region stood at 559 confirmed cases in 13 out of the 19 health districts in the Region which includes 6 in Bali Health district, 13 Bafut HD, 392 in Bamenda Health District, 4 in Batibo HD, 71 in Fundong HD, 4 in Mbengwi Health District, 1 in Ndop HD, 16 in Santa HD, 11 in Tubah HD, 3 in Wum HD, 22 in Kumbo East HD and 14 imported from out of the Northwest Region.

Out of these confirmed cases, 72 are currently being linked to treatment, 256 are currently on treatment with 12 hospitalized {8 on oxygen and 4admitted for other comorbidities}, 37 in the quarantine center and 207 at home. Among these are 3pregnant women. 176 have recovered and the Region has registered 55 deaths {47 in Bamenda and 8 in Mbingo}. Out of these deaths, 18 occurred in the hospital while 37 occurred in the community. The Communique on the epidemiological situation of the Region can be viewed here