Beware: The North West region has not been hit by a cattle epidemic 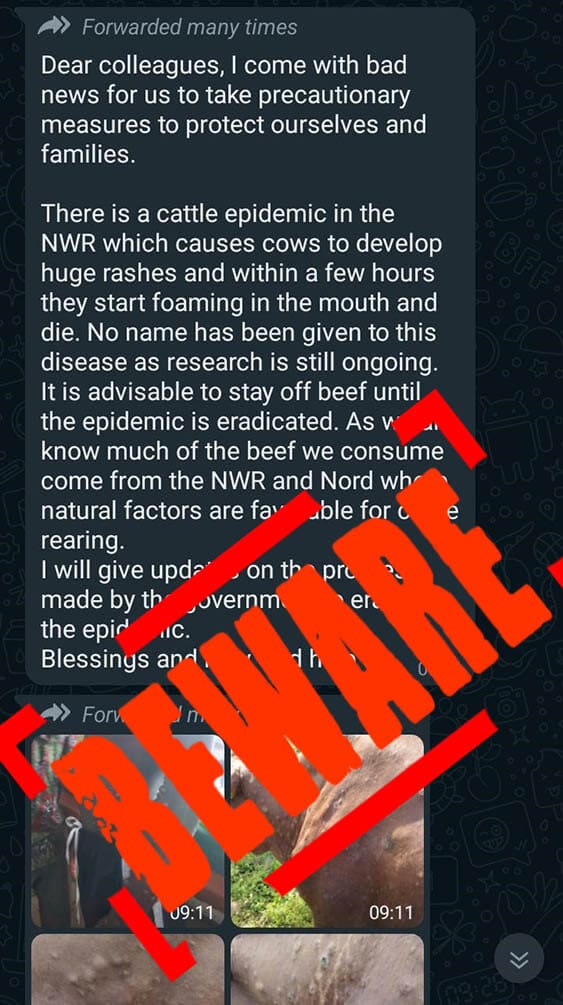 Beware: The North West region has not been hit by a cattle epidemic

A message that has gone viral on Whatsapp and Facebook since Friday July 8, 2022 has been announcing the outbreak of a cattle epidemic that has hit the North West region of Cameroon. After verification, the information turns out to be false and manipulative.

A few days ago members of the WhatsApp group « Journalist of Integrity » woke up to a message calling on them and their relatives to stay away from cow meat as a result of an epidemic that is currently affecting the cattle sector. The message that has now gone viral due to the inscription forwarded many times attached to it reads thus; « Dear colleagues, I come with bad news for us to take precautionary measures to protect ourselves and families. There is a cattle epidemic in the NWR which causes cows to develop huge rashes and within a few hours, they start foaming in the mouth and die”. The author of the message continues by indicating that no name has been given to this disease as research is still ongoing.

cattle epidemic A message that has gone viral on Whatsapp and Facebook since Friday July 8, 2022

A similar message is also carried on the Facebook page Brown Mumble –U.P.A with a total of 1,467 likes on the account. The post claims that a cattle epidemic has been noticed in the Northwest region of Cameroon and that anyone who consumes cow meat is likely to develop symptoms of the disease. It further states that “A family member has just caught the disease”

Contacted via a phone call, the North West delegate for livestock, fisheries, and animal industries Dr. Gah Dasi Walters first reacted to the topic by saying“It is a blatant lie. I and other cattle breeders have been in shock ever since the fake news emerged because we are on the field everyday and nothing like an epidemic has been detected on cows in the region”.

The livestock delegate for the North West during the discussion equally confirms that when the fake news began making rounds on social media, he submitted a detailed report of the situation of cattle in his region to the hierarchy and this prompted a press release from the Minister of livestock, fisheries and animal industries. According to the release, Dr. Taiga categorically denies the claim and considers it as “false information, manifestly devoid of any foundation and intended to create psychosis”. The Minister concludes by calling on the population to calm down and continue consuming beef which he confirms is regularly checked by veterinary experts.

After verification, the information turns out to be false and manipulative

Through a WhatsApp discussion, Dr. Atanga Heinendez, an expert in veterinary diseases and current Director of the National Center for Animal Husbandry and veterinary training in the North West region, debunks the claims of a widespread problem in the beef sector.  He clearly states that “the information about a new cattle disease outbreak in the North West Region is false and fake. Annual cattle mass vaccination against major epizootics like contagious bovine pleuropneumonia, Black quarter, Hemorrhagic septicemia, and Lumpy Skin disease is currently going on. No new disease has been encountered neither by MINEPIA staff nor graziers. In the case of the pictures used with spots on the cattle, it is a suspected case of streptothricosis (dermatophilosis). It is a bacterial disease caused by Dermatophilus congolensis. It does not have serious public health implications because the human infection is very mild, transient, and self-limiting and associated entirely with people closely handling cattle. In fact, Streptothricosis is a disease of cattle but does not occur in an epidemic proportion. Meat from the affected cattle is edible with no health consequences in humans”. Dr. Atanga adds that the images of cattle attached to the fake news are very misleading because years ago he used similar images to demonstrate to some students how diseases can affect cows.

For more details on the issue, we succeeded through a phone call to get in contact with Ousmanou, a cattle breeder in the North West Region. He tells us that his cows have shown no signs of an ailment for months now and that stories of certain diseases affecting the rearing of cattle are false. The cattle breeder notes that apart from the security situation negatively impacting their business, “All is well for now”. This affirmation leads to a confirmation that there is no cattle epidemic rocking the North West region as claimed by messages that have gone viral on social media.

Further checks using the keyword search method do not reveal any outbreak of a cattle epidemic in the North West region of Cameroon. However, a reverse image search using smallseotools with one of the images showing a male having rashes all over the body indicates that the picture was taken in Ghana. It was first used on the 25th of May 2022 by several Ghanaian websites announcing a case of Monkeypox recorded in the country. Later, on June 8, 2022, another Ghanaian website still used the same image to talk about Monkeypox discovered by Health authorities. Though the Ghana Health Service is reported to have debunked the outbreak of Monkeypox in the country, it, however, confirms that the image is that of a man in Ghana with blisters on the body.

Partager la publication "Beware: The North West region has not been hit by a cattle epidemic"