Fact-checking: Comfort Timasam’s Killers Have Not Yet Been Arrested 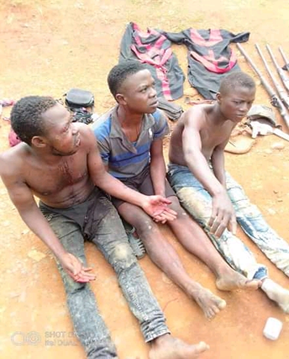 Picture of alleged killers of Lady in Muyuka and screenshot of searched pages with picture.
24 août 2020 DataCameroon Fact Checking

Unlike the fake news and photos circulating on social networks presenting several young people as Comfort killers, the Defense Ministry confirms that they are not under arrest. Analyses of the photos show other things pointing to an intention of manipulation.

35-year-old lady,Comfort Timasam,was on August 12 beheaded in Muyuka, a locality in the Southwest Region of Cameroon and a video of the macabre incident went viral on social media platforms. Another video with those who committed the atrocity justifying the reasons for the action also went viral hours after.

The next day, there was a picture that went viral showing three boys as the murderers of the lady in Muyuka. This led to a series of articles from international organs, confirming that the picture was that of the killers.Other local organs carried the same story, and after thorough Fact Checking, the conclusion is that the picture below was not that of the murderers of the Muyuka Lady and that the Killers are still at large.

Picture of alleged killers of Lady in Muyuka and screenshot of searched pages with picture.

On August 14, CCTN Africa published an article with head line “Three arrested over murder of woman in Cameroon’s Anglophone region”. According to the article, “The Cameroonian army said Thursday its troop has arrested three armed separatists suspected of murdering a middle-aged woman in Muyuka, a locality in the troubled region of Southwest. They were ambushed and arrested in their camp by the military that also seized their weapons. The operation was successful thanks to the collaboration of the public, the army said”.

Reporting same on the incident, Market Watch reported on that “Three Armed Separatists Arrested Over Murder of Woman in Cameroon’s Restive Anglophone Region”.The Market Watch article equally states that “The Cameroonian army said Thursday its troop has arrested three armed separatists suspected of murdering a middle-aged woman in Muyuka, a locality in the troubled region of Southwest. They were ambushed and arrested in their camp by the military that also seized their weapons. The operation was successful thanks to the collaboration of the public, the army said”.

From News Websites to Facebook pages, reported on the picture stating that, three suspects have been arrested over the brutal murder in Muyuka, South West region of Cameroon. The post which was made on August 13 at 7:23 Am, by the time of screen shooting had 943 comments, 67 shares and 1,300 likes

The picture gradually left Facebook to Tweeter as reported by Regina Sondo that “In #Cameroon, 3 persons have been apprehended over the gruesome killing of a mother of four, BihBlanche (Comfort Timasam) in Muyuka, Southwest Region by alleged separatist fighters. An investigation on the matter is underway”

Then to the Print Media where, without being sure of if the picture was that of the actual killers, The Median Newspaper No 402 of Monday August 15, 2020, published the same picture with caption “Hundred of youth have been captured in Muyuka and its environs”.

Just when we started planning to fact check the picture in question, another picture came up, three boys in the back of a pick- up allegedly to be the killers of the lady in Muyuka 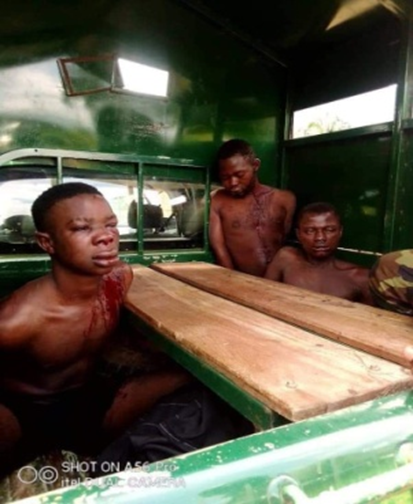 The said image and message was circulating Facebook on LCLC, with more than 90 000 members. Ibrahima Njimaah, a popular blogger writes that “The three monsters already in the army’s net…. the search for accomplices continues in Muyuka ….” raids.

As at the date of capture, the post had 157 comments and 613 shares, an indication that it has gone viral in no time. The picture and the message have also made rounds in more than 5 Journalism WhatsApp Groups with a possibility of over 2000 direct and indirect viewers.

When the Miners set to work, we started by observing the picture closely regarding the environment in which it was taken.

We discovered that it was taken during the dry season whereas the incident took place during the rainy season. This suggests that the picture was taken somewhere in the Northwest Region or the West Region Of Cameroon.Muyuka has a sandy soil and not a red clay-like soil as seen in the picture under review.

A further comparison of the two pictures that claimed to be the pictures of the murderers reveals two different sets of boys.

We also used some fact checking tools to find out the authenticity of the two pictures above and found out that the picture of three boys in the green van circulated on social media as picture of boys picked up in Mautu not Makanga where the Killing took place during a mass arrest.

According to Tineye, both pictures are original pictures but the Google Reverse Image proved that the picture of boys in the green van has appeared more than ones especially on tweeter.

According to Google Reverse Image, the picture of the boys in the van made its first appearance online on August 12 and has been used more than 10 times by different persons.

A metadata search with Photo Forensic analysis tool reveals the following properties which suggest the picture of the boys on the ground has not been edited.

Former MP Identifies Them As Amba

We also laid hands on a comment made on a WhatsApp Forum by Hon Enwe Francis, former MP for MomoWest who says he identifies the boys on the picture.

According to the Former MP, “These three young boys have nothing to do with the assassination of this lady, a day after her assassination, this took place in Bataw Village, after Widikum, where villagers arrested these Amba Boys then called for the military who came and took them, It has no link with the Muyuka killing, I can identify two of them, they are now in Bamenda”.

One of the frontline separatist activist, and Amba War Lord, Eric Tataw, told The Miners that the picture shown above has nothing to do with the killers of the lady in Muyuka. Quizzed on why he said so, he simply said, “I know what is happening in Muyuka”and refused to comment any further.

A few days later and in a recorded telephone conversation that went viral on Facebook, an Amba General, identified as General Charger, claims responsibility of the death of the lady in Muyuka. In the audio, he said, he personally killed the lady since she was traitor.

He continued that he doesn’t have time to play with anyone who is a traitor. The recorded audio interview was released days after the picture of the three guys had made rounds on social media. This further suggests that if he is the true killer, he is still at large.

When the picture and the message on it went viral, we contacted the Ministry of Defense who said as at the date of contact, they can’t confirm if the boys in the picture are linked to the Muyuka Murder.

However, in a telephone conversation with the Director of Communication at The Ministry of Defense on August 19, 2020, he denied the fact. According to Cyrille Atonfack “The killers of the lady in Muyuka have not been arrested, at least, not yet”.

From the analysis above it is clear that the picture showing three boys arrested in Muyuka for beheading a lady is fake. It must have been introduced online by actors of any of the two parts of the conflicts for propaganda reasons. The killers are still at large.

Partager la publication "Fact-checking: Comfort Timasam’s Killers Have Not Yet Been Arrested"

1 thought on “Fact-checking: Comfort Timasam’s Killers Have Not Yet Been Arrested”