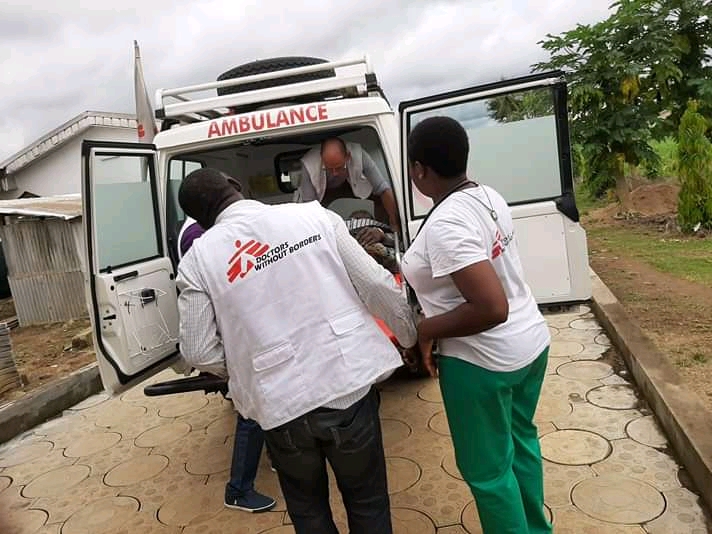 Recent pronouncements from the Cameroon Minister of Territorial Administration, Paul Atanga Nji, alleging that vehicles belonging to a Humanitarian Organizationare used to transport arms have been fact checked and the information points to falsehood.

Speaking to some journalists in Yaounde on December 28, 2019, the Minister of Territorial Administration, Paul Atanga Nji said, “In the South West Region, our defense and security forces stopped an ambulance from a humanitarian agency that was supposed to be transporting the injured. In this ambulance, there were certainly three wounded but who in reality were dangerous terrorists actively sought by the defense and security forces. Even more seriously, there were three Kalashnikovs and two boxes of ammunition in this ambulance.”

The Minister continued that, “You will agree with me that an ambulance from a humanitarian agency should transport war casualties and not ammunitions.”

According to Minister Paul Atanga Nji, “the defense and security forces carried out an unexpected control of a humanitarian aid convoy by a partner organisation. It contained rice, soap and other basic needs. Paradoxically in this truck, there were also three boxes of ammunition, binoculars, Android mobile phones, etc.”

Our findings led us to the fact that the main Humanitarian Organization that provides ambulance services and other medical support in the said zone is Doctors without Borders.

Speaking to Data Cameroon in the course of our investigation, Antoinette Buinda, Field Communications Officer for Doctors Without Borders said “We confirm that none of our vehicles, cars or ambulances have had any incident involving the transport of arms or ammunition.”

She added that Doctors Without Borders provides medical assistance in Buea, Kumba, Mamfe, Bakassi, and Bamenda and that in order to ensure the safety of their patients and enable their medical teams provide treatment and care, Doctors Without Borders has a zero-tolerance policy to having arms and ammunition in any of the health facilities they support and in any of the vehicles transporting their teams and patients, in any of the places where they operate in the world.

Antoinette Buinda told Data Cameroon that Doctors Without Borders is a neutral and impartial international medical organization that seeks to ensure access to healthcare for everyone regardless of race, tribe, religion or political affiliation.

https://www.facebook.com/176003385808434/posts/3294381370637271/?app=fbl also says that, in addition to supporting selected hospitals and health centers, Doctors Without Borders provides medical referral services (ambulances, boats) in Buea, Kumba, Mamfe, Bakassi and Bamenda to attend to emergency cases around areas where it is operating.

The Minister in his release also questions why Doctors Without Borders fail to corporaate with the administration.

“It is regrettable to note that certain humanitarian agencies sometimes arrived in the North-West and South-West Regions and carried out their activities without the knowledge of the administrative authorities. For example, two small WFP Toyota Pick-ups and a Médecin Sans Frontière ambulance were attacked by terrorists in the North West and South West when their presence was not reported to the administrative authorities.”