Fact-checking: General No Pity Is Alive But Did Not Celebrate October 1, 2020 In Ndop 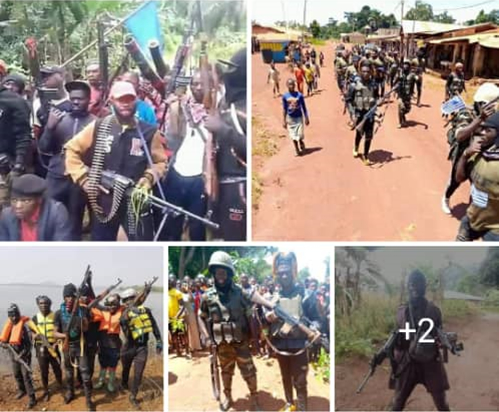 Contrary to reports on Social Media, that Ambazonian General No Pity led a battalion in celebrating October1, Fact checking results has proven otherwise.

Our check points to the fact that though he is alive, the pictures and videos that circulated on October 1, 2020, were not taken on the said date.

On October 1st 2020, many videos circulated on the social media suggesting persons had come out in their numbers to commemorate October 1st, 2020 the day Southern Cameroonians know as their independence day.

Manifestation of any type on October 1 became illegal after separatist leader Ayuk Tabe pronounced independence for the country they are fighting to have called Ambazonia.

Since 2017 government via defense and security forces has launched a crackdown on protesters in the North West and south west regions of Cameroon most of the manifestations that take place on this day are away from the public. Flags are sometimes hoisted by unknown individuals in neighborhoods.

In one of such videos that circulated on social media posted by Ndong Emma, a voice in the background says “this is the day, today is the 1st October 2020 we have just started marching. This is the marine force of Ngoketuja under the command of General No Pity who is the father of the marine force”. This suggests that they are still acting under the command of general No Pity.

Still on October 1st, 2020 Kemita Ashu writes that “No Pity and his boys Marching and singing praises to President Samuel Sako who has given them sticks and bundle upon bundle of groundnuts. They have sworn that come rain, come sun#AMBAZONIA_MUST_BE_FREE”

Same day, Kemita Ashu writes that “General no pity celebrates with his people who love him so much! What a joy to be loved by your people!!! LRC is not wanted in ambazonia.  You have been rejected. Pack and leave! ambazonia_must_be_free” The post had 56 shares at the time of this report.

General No Pity Death Or Alive

In March 2020, news went viral on social media indicating that general No Pity was dead.

On the face book page of Cameroon News Agency with 67.304 followers, a post with 69 shares 260 comments and 360 likes, posted at 11:35PM on March 23rd, 2020 had as headline” Ambazonia Commander of the Bambalang Marine Forces, popularly known as General No Pity has died”.

As we were tightening this article, we stumbled on a site that said the death of General No Pity was a makeup. The link by Camerounweb.com states that “Ambazonie : la mort du redoutable Général No Pity était une mise en scène”

From our findings, the article written by Michel Biem Tong  who quotes without naming his source as a close source in the Ngoketunja Security Council.

The report on Cameroun web.com also states that during the attack in Ngoketunja, over 20 Cameroonian soldiers were killed while 4 Separatist Fighters also died. The report added that 13 Civilians were killed and many houses set on fire by the Cameroon military, quoting an anonymous witness in the ground.

However, a tweeter search on General No Pity revealed that on March 23, 2020, Honour Et Fidelite, an account of the Cameroonian Army tweeted on the death of the General and equal that has a picture of the said General Pity death in a bed with a gun by his side and cotton on his nostrils.

The tweet states that he died from wounds sustained during the attack in Bambalang, North West Region Of Cameroon.

Further Fact Checking with the communication unit of the Ministry of Defense confirms that General No Pity is Alive though they could not confirm that he ever led a March on October 1, 2020.

Colonel Atonfack Cyrile , Communication Head at the Ministry Of Defense Confirmed with the word Alive, in a chat with the African FactCheck, Cameroon Miners team on Sunday September 5, 2020.

When The Miners first saw this video on we observed that it has spent 13 hours online.

By our calculation it was posted at about 6am on October 1.

Looking at the weather, the shadows in the images the Miners concluded the image could not have been recorded that morning.

Other pictures that circulated in related to the March were also taken to Google Reverse Image for verification.

This picture which appeared on October 1 and posted by  Kemita Ashu as part of the Celebrations organized by General No Pity first appeared on tweeter on Herbert Boh @BohHerbert account on Dec 29, 2019 in a post to display the weapons of the separatist fighters and not the October 1, 2020 March as indicated. The sets of pictures under investigation were also taken to TinEye, yet no revelations of their use were obtained.

After our verification, we can confirm that the video and pictures were not taken on October 1, 2020 as indicated but was taking sometime earlier.

We can also confirm that General No Pity is alive but did not organize a March on October 1 in Ndop.

Just like other videos and images that went viral on October 1, 2020, the Video and images under investigation is just propaganda from the separatists to push their part of the fight ahead.

Partager la publication "Fact-checking: General No Pity Is Alive But Did Not Celebrate October 1, 2020 In Ndop"