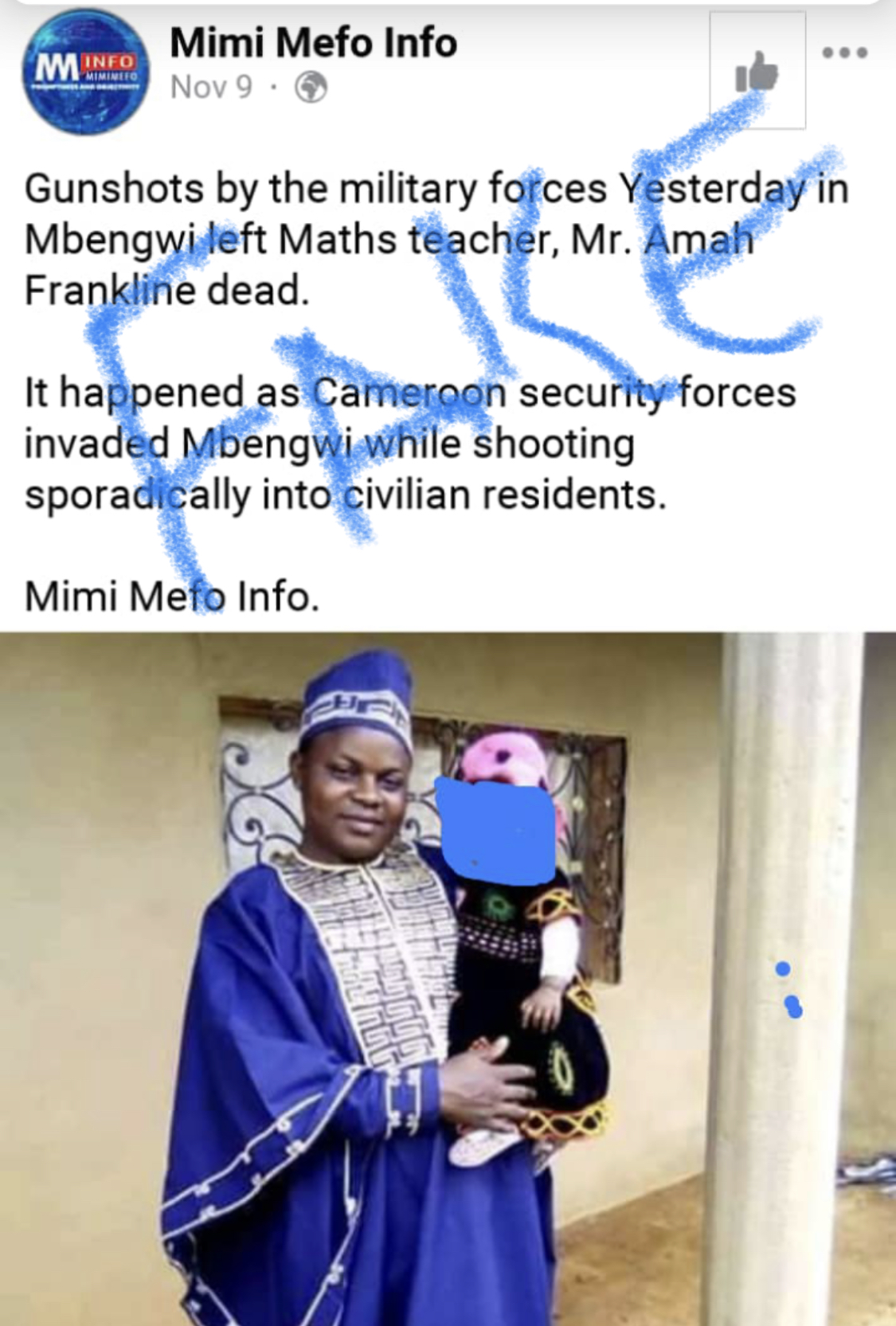 Contrary to a social media report by Mimi Mefo Info that « Gunshots by the military forces yesterday (meaning Sunday November 8 2020) in Mbengwi left Maths teacher, Mr. Amah Frankline dead », DataCameroon after fact checking has found out that nothing as such happened in Mbengwi »

A report was published on the Facebook page of Mimi Mefo Info (MMI) having 216.087 followers on Monday November 8 2020 that, « Gunshots by the military forces yesterday [Sunday November 7 2020] in Mbengwi left Maths teacher dead. » MMI added that « It happened as Cameroon security forces invaded Mbengwi while shooting sporadically into civilian residents »

By the morning of Thursday 12 November 2020, barely two days after publication, over 1000 comments had been made under the post, it had been shared 175 times and had recorded 2.400 likes and reactions. Michel Biom Tong, a Cameroonian freelance journalist in exil also published a translated version of the report in French on his Facebook page that gained 56 shares.

Radio Balafon, FM 90.3 in Douala during its morning newscast of Tuesday November 10 2020 also reported about the incidence saying it happened in Mbengwi. There’s a high probability that they got the information from MMI’s Facebook page

Atmosphere of Mbengwi on Sunday November 8 2020

Inhabitants went about their daily hustle and bustle unperturbed. Commercial activities and circulation weren’t at any point interrupted throughout the day. The mayor of the municipality, Ndangsa Kennedy Akam that morning rallied his friends, family and followers at Presbyterian Church Mbengwi Congregation for a Thanksgiving service after which there was reception in the council hall. At the Mbon motor park in Mile 18, the commercial centre of the subdivision, it was business as usual till nightfall. Nowhere within the entire subdivision were any gunshots heard.

Under the post by MMI, we read at least 10 comments by inhabitants of Mbengwi refusing such a thing happened in their area. A certain A.T Gordon commented that « Not in Mbengwi Mimi. Mbengwi was calm and peaceful yesterday and no military attack in the town »

Was Someone Killed Elsewhere?

Having confirmed that no such incidence occurred in Mbengwi, DataCameroon went on to find out if any killing incidence was reported anywhere else. Yes, someone was killed that Sunday November 8 2020. Several online news sources like Laarry’s News Room, Cameroon News Agency, Camerounweb, Cameroun-Info, ActuCameroun and a host of others all reported of such a happening in Bamenda, some giving the precise location as Alabukam. Some of the reports gave the victim’s name as Amah Frankline others as Franco.

A deep (advanced) search via google for such a name on the net took us to a document signed for the Minister of Secondary Education and by Delegation, the Secretary General of the said Ministry, Prof. Fabien Nkot, dated 28 July 2020 and titled Advancement Decision for the Month of July of Some Personnel of the Ministry of Secondary Education. On it, we found the name AMAH FRANCO ANCHEBE having as Service (Matricule) number 620114Q.

We also checked and found an account on Facebook bearing the name Amah Franco. We found a picture of him used in some of the reports in which he’s putting on the uniform of the Christian Men Fellowship (CMF) of the Presbyterian Church in Cameroon to which he was a member. He lastly updated his Facebook profile with this picture on June 26 2019.

Having ascertained the veracity of the murder act, DataCameroon will then proceed to dig out circumstances surrounding the killing of Mr. Amah Franco Anchebe. Firstly, we read keenly the various comments made about the incidence on Facebook and WhatsApp to see who was saying something vital from whom one could extract more information. We noticed a certain Amah Phill (suspected to be short form of Philemon) who reacted that the deceased was his uncle.

So, we reached him for details and he said « My uncle Franco had built in Alabukam but left to rent in Nkwen due to insecurity and for his children to school. He had a poultry farm in Alabukam and so went that Sunday to check on his house and the birds. Unfortunately, he never came back as he was killed » He couldn’t say who actually killed him

Mr. Abono Shadrach is the Bamenda branch president of Ngwo Cultural and Development Association (NCADA). Contacted on phone, he first disclosed that Ngwo in Njikwa has about 12 quarters with each quarter having a development meeting all of whom then combine to form NCADA. He said the late Amah Franco had attended his  Ngebenge quarter meeting in Nitop 4, Bamenda that Sunday and then went home. Early Monday morning, he got the news first as rumours and later confirmed it to be true that Franco had been killed. He added that his mortal remains will be removed from the Bamenda Regional Hospital mortuary on Saturday November 14 2020 for burial. Asked who killed him, he said « I cannot tell. We only heard information tgatbit was stray bullet »

Mr. Anyangwa Theophile is an elite of Ngwo, retired Director of the Ku-Bome Fish Breeding and Training Centre Mbengwi. When the news broke out he too did some findings. Reached via a chat app, he told DataCameroon that « I spoke with a guy related to the late teacher and he said Franco and friends were drinking and playing draughts/checkers (commonly called « Draff ») at Alabukam where he had built. An Amba guy then fired a shot at the military nearby, wounding one. Then the military in retaliation started shooting around randomly. That is how Franco and two others were killed »

He added that another source told him that apart from at least 3 deaths, many other civilians were wounded and were carried by Doctors Without Borders to Saint Mary and Bingo Baptist Hospital. Again, the source told him that the military had told the community that if they were ever attacked, many will die.

To establish if there were more than one death and several injured, we contacted the communication officer of Doctors Without Borders, Nemkul Frida to find out if they did any intervention in Alabukam on the Sunday of the incidence. She said unfortunately she’s on leave but minus that, it’s not part of their policy to give out any information related to their patients to the public.

Having assembled all our findings together, DataCameroon has established as fact that Mr. Amah Franco Anchebe, a Maths and Physics teacher of Government Bilingual Secondary School, Bafut Subdivision, a native of Ngwo in Njikwa subdivision, resident in Bamenda was killed on Sunday November 9 2020 in Alabukam, Mankon, Bamenda and not in Mbengwi as reported by Mimi Mefo Info and others.

However, we have not been able to fully confirm who killed him but what’s certain is that they were gunshots, a bullet caught him and he died.