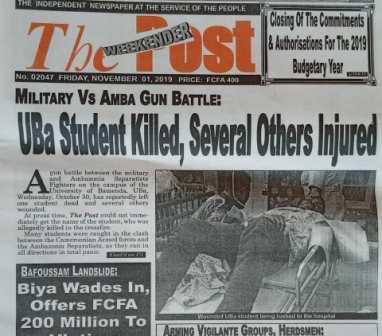 At the beginning of November 2019, several newspapers announced that a student from the University of Bamenda had been killed as a result of a confrontation between the military and the Amba Boys. After verification, it is not true.

The Post Weekender Newspaper, Edition No. 02047 of Friday November 01, 2019 had as major headline on its front-page Military Vs Amba Gun Battle: UBa Student Killed, Several Others Injured.  In the story, continued on page 3 of the publication and bylined by Romaric Tume (UBa CADs Student on internship) “A gun battle between the military and Abmazonia Separatists Fighters on the campus of the University of Bamenda, UBa, Wednesday, October 30th, has reportedly left one student dead and several others wounded.” However, this story has been fact checked and found not to be true.

Wifah Jennyhans is a Communication and Development Studies (CAD) student in the University of Bamenda (UBa) who was in Bambili on the day of the incidence. Questioned on what really transpired, he said “We heard gunshots on that day but could not ascertain if it was an exchange” He added that “What has been established is that some students were kidnapped on that day and the military was after the kidnappers” The report in the newspaper concludes that there was a crossfire.

In our findings, we found out that no student was killed, several others weren’t wounded. Rather, one student sustained an injury. Several attempts made to get Professor Cheo Victor, Head of Division for Press at the University of Bamenda react on the subject failed. The name of the student concerned is Fonyuy Gilford, studying Computer Engineering in the National Polytechnic Higher Institute (NAHPI), second year.

He was wounded but not in a life-threatening situation because we learnt he was administered first aid by the university medical unit before being transferred to the Bamenda Regional Hospital for proper medical attention and was later discharged and is at moment going on with his studies.

In its Edition No. 02048 of Monday November 4th 2019, The Post issued a corrigendum titled “We Erred!!!” in which the paper admitted the main headline it carried on the front page of the previous edition wasn’t true. The Editor of the paper wrote that “…we erroneously reported that one student was killed and several others injured. This was not the case. No student died…” The Editor’s note ended with an apology to readers, staff, management, students of the university for any inconveniences the article might have caused them.

In the course of the ongoing anglophone crisis, cases of attacks on the university of Bamenda by restoration forces in an attempt to stop academic activities from going on there have been reported. Proponents of secession have ever since been struggling to enforce a complete school shutdown across the entire North West and South West regions of Cameroon but the call is being resisted in most safer areas as many students, teachers and parents are bent on pursuing studies. It is for this clash of interest that from time to time, attacks on educational facilities and stakeholders are reported. Both lecturers and students have been victims of kidnappings and when the demanded ransoms are paid, they are freed. Some have sustained injuries from stray bullets or in attempting to escape for safety when both the military and non-state armed groups start a gun battle. Few have unfortunately been killed.

Following the wave and unchecked crescendo of security threats on academic staff especially on their way to Bambili and mindful of the assassination attempt on the  7th of November 2019 at the Bambui-Bambili C- Bend  of Dr. Mbifi Richard, Lecturer and Director of Administrative Affairs in the University of Bamenda that was just a case in numerous attacks and abductions of lecturers in the same spot plus other challenges like the financial impoverishment of lecturers, some of whom have been victims of kidnappings, members of the UBa Chapter of the National Union of Teachers of Higher Education (NUTHE) in solidarity and appalled by such an unhealthy working environment on Friday 8th of November 2019 attempted staging a strike action but the timely intervention of N.W governor Adolph Lele Lafrique who met the aggrieved lecturers on campus before the strike could commence helped in calming down rising tensions as some of the demands were looked into.

Though the teaching and learning process is still ongoing, sources in the university affirm that the enrollment of students is said to have dropped compared to the past years. Heightened insecurity brought about by the ongoing anglophone crisis greatly accounts for this.