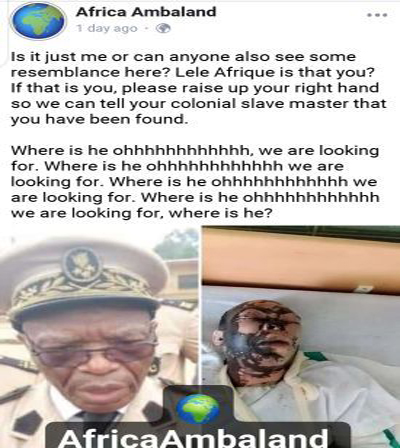 On Monday the 21st of October 2019, the news was broken and spread on social media that the convoy of the N.W governor Adolph Lele Lafrique has been attacked. One of the early sites that reported the fake news was BaretaNews.

The site published that “BaretaNews can now confirm that the colonial governor of Northern zone convoy was ambushed yesterday and five of his soldiers died on the spot. We cannot say at this time the health situation of the northern zone chief killer, Mr. Governor. We will bring you updates soon. Stay tuned”

Other sites like Mimi Mefo Info and Cameroon News Agency also picked up the story of the attack but talked of no killings like BaretaNews claimed. Within the next minutes, fake news publication sites immediately got down to work, twisting the story with fake images and videos plus write ups to push forth their propaganda agenda.

Amba Go Viral is one of the specialised fake news sites that twisted the story. At 1:44pm on Tuesday October 22nd, the page published a report titled “What you must know after the colonial governor was attacked on his way back from Nguketunjia.” The fake report said “LRC colonial governor of the Northern Zone was fatally wounded in the attack as he returned from Nguketunjia…Thirdly, the death toll had increased to ten persons in the convoy.” The said site in the report went ahead to publish an image of a  child soldier of “3 years old” being used by government forces that the restoration fighters also killed during the attack but looking at the image, it’s a boy of over 18 years dressed in military uniform but not that of the BIR, the special force that was securing the governor. To further justify the fake news, Amba Go Viral posted an image of a burnt military truck, identified by the various comments made under the post as belonging to the Nigerian army yet was shared to insinuate that it’s an armoured car in the governor’s convoy that the fighters destroyed.

On the YouTube channel Ambazonia Latest News, a video was posted with a fake image still alerged not to be Cameroonian and an attached voice note in which the reporter said “The motorcade of NW governor Adolph Lele Lafrique has come under another serious attack by separatist forces. The attack which we learnt was very fierce took place on the 20th of October as the governor was returning from nkambe where he just installed the SDO there.”

This is fake. No S.D.O (Senior Divisional Officer) was installed in Nkambe on this day. Instead, the governor went to Nkambe to donate gifts to a vigilante group there, this after installing Lanyuy Harry Ngwanyi as S D.O for Bui division which is different from Nkambe, headquarters of Donga Mantung division in the N.W region.

To add to their propaganda scheme, indicative of how the fake news network is set up, the Facebook site Cameroon News Agency published a video in which a non state armed group known as The Tigers of Baba 1 under a certain General Shao Mao narrate how the Baba attack on N.W governor’s convoy took place on Monday, October 21st 2019. In the said video showing some splitted pieces of wood (eucalyptus) and  an Express Union mobile box that were supposedly used to block the road at a giraffe crossing spot on the highway,  the voice of a supposed fighter identifying himself as spokesperson of LLF, Mountain Tigers of Baba 1 is heard narrating their “achievement.” He talks of how glasses were scattered and blood spilt at the scene during yesterday’s incidence but with no specificities on which particular incidence he was referring to. Watching the said video, no blood is seen, no scattered glasses.

Since it takes only a lie to justify another lie, Africa Ambaland, a Facebook page soon joint the fake news dissemination network to publish a fake video of a hospitalised injured man with a shattered left hand from where blood was oozing claiming it’s the governor.  Another fake photo of the same man alerged to be an accident victim was circulated on the site still claiming it was the governor.  This set confusion in many WhatsApp groups and on several Facebook pages as some persons could lick poison that it was truly the governor lying on the bed.  To the fake photo,  a dirge was attached “We are looking for,  where is he oh” meaning the governor had died yet on Tuesday October 22nd 2019, the said governor Adolph Lele Lafrique was on the Bamenda grand stand, Commercial Avenue looking hale and hearty during a ceremony to install Mooh Emile Simon as new S.D.O for Mezam division, the very governor that was reported on social media to have been seriously injured, killed.

The propagandists went as far as falsifying The Guardian Post Newspaper, edition no. 1754 of Tuesday October 22nd with a fake front page headline that read “NW Governor Adolphe Lele L’afrique brutally attacked and wounded by Ngoketunja Ambazonia fighters killing 7 soldiers on the spot and 10 others who died later   due to serious gunshot wounds as war intensify in full force” The original main headline of the newspaper was “Upcoming legislative, municipal election: How Possible is NW, SW?

In WhatsApp groups, two voice notes were recorded and circulated in which the speaker again identified himself as General Shao Mao of the Ngoketunjia Restoration Forces. In the first audio clip, the speaker said Baba is red as the governor’s convoy has been taken down with explosives. In the second (5mins 39secs) he expressed happiness and gratefulness, extending thanks to all generals, commanders, especially commander Bin Laden of Baba 1 and foot soldiers particularly Baba 1 Mountain Tigers for a job well done, calling on them to remain calm as something is seriously happening. “I’ve received a call from colonels and generals and I want to tell La Republique that they should account of Lele Afrique, his return back to Bamenda as they passed through Baba 1, why are they quiet?  said General Shao Mao in the voice note. Again, the very next day, the probably resurrected governor was seen in public carrying out his state duties.

To get the veracity of what actually transpired, I contacted a source that was part of the governor’s convoy who concluded to me “It is fake, it is not true” a conclusion that was preceded by a detailed account of the journey.

As we left Bamenda to Kumbo for the SDO’s installation, around the Bambili hill, we heard a loud noise “Pouuuummm!!!” We were told it was a mounted explosive that just exploded. We continued till Kumbo, did the installation, took off for Nkambe where the governor had to donate some gifts. At Kikaikilaiki, we heard one gunshot. We continued till we reached Nkambe. The next day we went to Misaje. In the morning we handed the gifts to the vigilante groups down there. By 3pm I overheard the military saying we will have to pass the night in Nkambe. I asked why and they said it’ll be very risky travelling in the night from Donga Mantung through Bui because it’s difficult to fight the restoration forces at night. They equally told me that they’ve gotten security reports that explosives have been mounted along the road. So, we passed the night in Nkambe and got up in the morning for Bamenda. On our way, around Kikaikilaiki Maa, we had serious gun battles there that affected a red civilian car. The fighters targeted the civilian car because that was the only car their locally fabricated bullets could penetrate. In the exchange, the door glass was shattered slightly wounding a Muslim woman that was seated on the front seat. They were taken care of by the medical soldiers who were onboard the trip. As we were leaving Babungo for Baba 1, other series of gun battles ensued. Upon entering Baba 1, the convoy haulted. I heard “Bouuummm!!!” and I saw a lot of smoke. I was told an explosive had exploded where the armoured car was standing but its occupants weren’t inside.  All the soldiers that were in it had descended to take cover in the bush. After the shootings, they came back, entered their car and we took off till we reached their base in Ndop. Again we were told we won’t be allowed to continue because there are a lot of “Ambazonian” fighters at Bamessing waiting for this convoy. Some 8 soldiers left for the bush and all we could here was deafening gunshots.  When we finally took off, we didn’t hear any gunshots again until we reached Bamenda. That’s the story my informant recounted to me.

Images of the said red car, matriculated LT 523 IJ were circulated on social media particularly on the site Cameroon News Agency (CNA) saying “A baptism of fire for newly installed BUI SDO whose convoy was attacked on Tuesday by Ambazonia fighters in Bui. No one died but some occupants sustained minor injuries” This is very fake. The newly installed Bui SDO was never attacked. The red car wasn’t even his

Despite all the evidences that the governor’s convoy was attacked severally, military sources have denied that such a thing happened. In a release being circulated on social media, Commander Cyrille Serge ATONFACK GUEMO, Head of the Communication Division in the Ministry of Defence says “Pseudo-secessionist extremists are spreading rumours suggesting that the convoy of the Governor of the North-Western Region, Adolphe Lele Lafrique, was attacked, with heavy human and material casualty. This is not true. Nothing as such happened.”