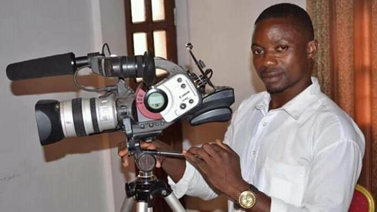 The Government of Cameroon has declared that late Journalist Samuel Ebuwe Ajiekiaa.k.a Samuel Wazizi’s family was contacted after he was moved to Yaounde. After verification, DataCameroon is able to say the opposite.

The declaration was made public by the Chief of Communication in the Ministry of Defense, Cyrille Serge Atonfack, through a communiqué dated June 5, 2020. According to the communiqué, the journalist died due to infections in a military hospital in Yaounde since August 17, 2019. 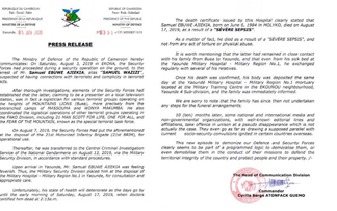 The communiqué further revealed that he has been in constant communication with his family since he was arrested on August 2 and also states that when he died, his family was informed about his demise and where his corpse had been deposited pending burial. The same document also wondered why the family of the late journalists decided to abandon the corpse at the morgue till date.

The government representative further says Wazizi was arrested for having connections with terrorists and complicity in terrorism acts, adding that after investigation, they discovered that he was a logistician for several terrorism groups. On August 7, according to the document, Wazizi was sent to the 21 Motorized Infantry Brigade and latter transferred to the Central Criminal Investigation Service of the National Gendarmerie on August 13, 2019.

We are also told by the communiqué that upon arrival in Yaounde, he was feverish and was sentto the military hospital for treatment. Cyrille Serge Atonfack, in his communiqué declared that Wazizzi died on August 17, 2019 as a result of severe Sepsis and not from any form of torture or physical abuse.  These declarations from the government, it should be noted comes after a Douala-based TV station had announced, authoritatively, that Samuel Wazizi had died sometime in August 2019.

The announcement from the TV station is reported to have been an eye opener to journalist who have since his arrest, been clamoring for his release or at least an appearance in court.

Unable to have access to their client, the lawyers filed a habeas corpus lawsuit on August 13, 2020 urging the government to produce their client for a formal court hearing to answer to the charges levied against him.

While the lawyers were pressing the court to produce their client, the journalists associations to which Samuel Wazizi was a registered member, joined their voices to that of the lawyers on November 5, 2019.

The silence from the government and repeated adjournment of the case pitting Samuel Wazizi against the Republic of Cameroon became unnatural and many concerned groups treated the silence with contempt.

By the start of the year 2020, the absence or disappearance of Samuel Wazizi from the face of the earth was more real than apparent and the noise-level from journalists associations was reverberating across the lands and oceans to far-away boarders.

The smile-looking and composed portrait of Samuel Wazizi could be seen on all newspaper pages, social media groups and public posters.

The situation finally went off hand on Wednesday June 3, 2020 when the Cameroon Association of English Speaking Journalist, CAMASEJ, and other journalists’ associations stormed the Southwest governor’s office asking explanations on the whereabouts of their colleague following the announcement of his death by a TV Station based in Douala on Tuesday June 2, 2020.

The Southwest governor, Bernard Okala Bilai, is reported to have distanced himself and his Region from the Samuel Wazizi case. Governor Bernard Okala Bilia is on record to have told the pressmen in the conclave that Yaounde should give an account of the journalist’s sudden disappearance.

He further told journalists that by the time Samuel Wazizi was being taken to Yaounde, he was in good health. This declaration from the Governor raises worry over the statement from the Ministry of defense that Wazizi got to Yaounde with a poor health record.

As the journalists were considering their next action, that is to take Yaounde by storm, then came the communiqué from the government through the Chief of Communication in the Ministry of Defense, Cyrille Serge Atonfack, on June 5, 2020. The communiqué from the Ministry of defense ever since it was released on June 5, has been attacked and challenged by many sources with a lot of unanswered questions raised both online and offline. This pushed us to fact check some element of the press release.

According to our findings, there was no conversation between Wazizi and his family ever since he was handed to the Military. The last time anyone saw or heard from him was in Muea Police station, a few days after his arrest. His brother, Henry Abogho, has denied the government’s claim that they were both in constant communication with Wazizi and were aware of his situation and the death. 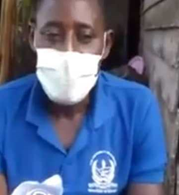 After being briefed by a journalist on government position regarding Wazizi’s death, his brother is reported to have said, “Since Wazizi left Muea police no calls no news. I would have told you because I know you as a journalist and friend to Wazizi. I am the one following up the case for my family and my number is everywhere, why did they not call me, they are lying.”

According to Henry, “The last time I saw my brother was at Muea police station. When they took him to the 21st motorized infantry battalion, I went there several times but they chased me away saying people are not detained there”.

Wazizi’s sister-in-law, Metete Joan Njang, told cpj.org in a phone interview that the journalist’s family had not been able to contact him since shortly after his arrest on August 2, 2019, and was not made aware of his death until a news report on June 3.

In a youtube video that went viral on https://www.youtube.com/watch?v=GD4aroIqemc, his brother narrated that someone had called him to request for FCFA 30,000 to remove Wazizi from the cell that he was because he is not in good shape. He added that when he asked to speak with Wazizi, the caller dropped and they have not heard anything till the government announced that he has died.

In a telephone conversation by datacameroon to find out through which means was Wazizi’s family informed about his death, the head of Communication Unit at the Ministry of defense said, it will be made public at the appropriate time

Although we could not lay hands on any of his medical reports, Wazizi’s Family members, both his Brother and Sister In-Law recounts that, he has hardly been sick, very hardworking and provides basic needs for the family.

From the circumstances surrounding his arrest proper, it is clear that he was well and hearty the day he was picked up at 11.00 am if we go by the narrative of his boss at Chillen Muzik and Television His boss narrated that, he was instructed by the security officers who stormed his office, to call for Wazizi on phone hands free.

That he was also told to tell him that there are some clients who need his service at the radio and that a few minutes after the call, Wazizi landed, hence by the time of his arrest he was not sick. This further corroborated the governor of the South West Region who had told Journalists that Samuel Wazizi left Buea and got to Yaounde in good health, adding that he is not aware of what ever happened after that.

The government release states that Wazizi did not die of Torture and rather that he was sick and later died. However, Emmanuel Nkea, one of Wazizi’s lawyers, told rfi.fr/en   that they had received new evidence on from a close friend of the deceased journalist that he had been tortured. “This person has confirmed to us that…some people had called her phone and said to her that they wanted her to send some money to Wazizi, intimating to her that Wazizi had been so badly beaten, to a point that his waist was broken,” says Nkea. 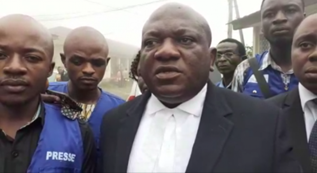 The lawyer says that they are protecting her identity for now, but when Wazizi had originally been arrested in 2019, he had given him a list of close contacts that included this person. The people calling the contact said “he needed medical assistance, so she sent FCFA 20,000 to a particular number with the name of the person. We have all these details,” says Nkea.