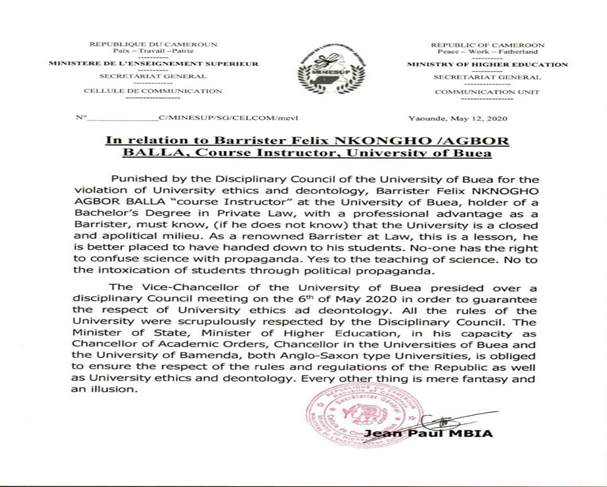 On May 12, 2020, Jean Paul Mbia of the Communication Unit of Cameroon’s Ministry of Higher Education (MINESUP) claimed that Barrister Felix Agbor Anyior Nkongho alias Agbor Balla was recruited as instructor at the University of Buea with only a Bachelor’s Degree in Private Law and professional advantage as a Barrister. This is false after verification.

Contrary to the MINESUP Director of Communication’s claim, we understand Felix Agbor Anyior Nkongho’s profile is richer than was presented. He is a Barrister at Law of the Supreme Court of Cameroon and Nigeria. He graduated from the University of Yaoundé with an LLB in English Private Law, after which he attended the Nigerian Law School in Lagos wherein, he graduated with a BL Second class Upper Division with a 1st Prize in Civil Procedure.

He created the Committee for the Defense of Human Rights in 1998 and in 2005 it was transformed to the CENTRE for Human Rights and Democracy in Africa upon a meeting with other African students of the LLM program at Notre Dame University, USA.

Felix Agbor Anyior Nkongho is a human rights lawyer, the first Chairperson of the Southern Cameroons European Coordinating Committee (SCECC) and led a delegation with ace human rights activist, Albert Mukong to the President of the EU Commission to discuss the Anglophone problem.

Agbor Nkongho has worked on several cases of marginalised and victims of human rights abuses. He led a peaceful strike action of lawyers and teachers to protest against the hyper centralised and majority French speaking government in Cameroon, which undermines the Common Law System and Anglo-Saxon Educational system of the minority Anglophones in Cameroon.

Agbor Nkongho was President of the now outlawed Cameroon Anglophone Civil Society Consortium (CACSC) which was comprised of teachers, trade unions and lawyers of the Common Law System who called for a return to Federalism as a system of government which will address structural discrimination and marginalisation of Anglophone people. The Anglophone Consortium was tasked to dialogue with the government on the Anglophone problem and negotiate a solution.

Agbor Nkongho was arrested on January 17, 2017 after several failed attempts by the government of Cameroon to negotiate a short-term solution to the Anglophone problem with him.

Agbor Nkongho was charged with terrorism, rebellion to incite civil war, revolution, contempt against the State, and secession which carried the death penalty. His arrest marked a wave of street protests, radicalization and demonstrations demanding his release. The government’s response was a brutal crackdown which further radicalised the population and many started demanding independence for the Anglophone regions.

On August 30, 2017, President Paul Biya issued a decree, stopping legal proceedings against Felix Agbor Anyior Nkongho and several others arrested who were facing trial before the military court.

As part of broad consultations after his release from jail, Agbor Nkongho held a meeting with all-party parliamentary groups in the UK House of Lords and discussed the Anglophone crisis at Chatham House.

Upon request by US Congress Foreign Affairs Committee, Agbor Nkongho presented a written statement for the Africa, Global Health, Global Human Rights, and International Organizations Subcommittee Hearing on the Crisis in the Republic of the Cameroon. He addressed the Canadian House of Commons Committee on International Human Rights. He recently issued a joint appeal for peace with German MP, Dr Christoph Hoffman. He equally recently briefed a high level German Parliamentary Delegation in the presence of the German Ambassador to Cameroon

As an activist he advocated for non-violent change and through his organisation, Centre for Human Rights and Democracy in Africa, he has documented thousands of cases of human rights abuses and violence in Cameroon while proposing a political and humanitarian solution to the Anglophone crisis in Cameroon to avoid a civil war or genocide.

The University of Buea, on May 6, terminated a contract with Barrister Agbor Balla, citing the violation of the institutional ethics – setting a question on the Anglophone Crisis. To them, he violated the apolitical nature of the academic milieu in a course he taught: “Political & Constitutional History of Cameroon.”

The Human Rights advocate boycotted UB’s disciplinary council, citing non-respect of his fundamental human rights. He was recruited on June 2, 2015 as Instructor at the Department of Law at the University of Buea.