No, Jack Andrew Pendleton did not flee from Cameroon due to threats 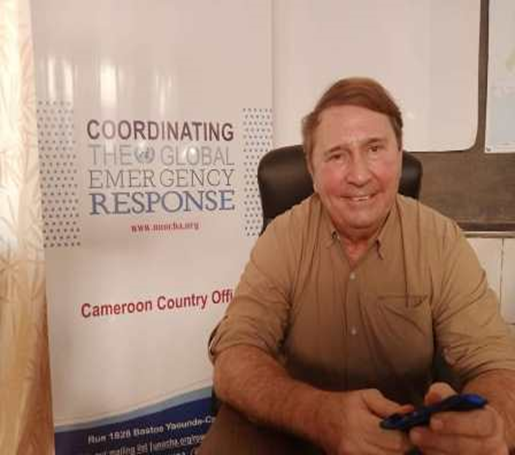 Contrary to social media reports that Jack Andrew Pendleton, UN Coordinator of Humanitarian Affairs for the Northwest Region fled Cameroon due to threats which some posts say came from Cameroons Minister of Territorial Administration, Mr. Atanga Nji Paul, UN in a tweet says Andrew Pendleton left Cameroon at the end of his contract.

Social media discussions have centered on the exit from Cameroon of Jack Andrew Pendleton, UN Coordinator of Humanitarian Affairs for the Northwest Region holding firm to the above claims. A Facebook surfer on February 23rd said Mr. Andrew Left Cameroon following threats from Territorial Administration boss, Atanga Nji Paul as we can read here https://m.facebook.com/story.php?story_fbid=2530807290507558&id=100007349352315.

The message from Pirlo’s Facebook page was equally shared on whatsapp as could be captured below. 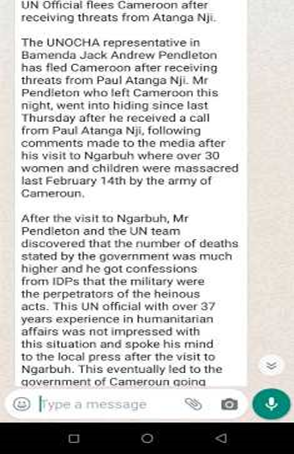 Larry’s Newsroom on the 24 of February on its Facebook Page https://web.facebook.com/groups/270072686531294/permalink/1289369941268225/?_rdc=1&_rdr Wrote “Threats Pushes OCHA-Sub-Office-Bamenda-Head Jack Pendleton To Flee Cameroon. The Bamenda Sub-Office Head of the UN Office for the Coordination of Humanitarian Affairs (OCHA) in the North West region, Jack Andrew Pendleton, has fled his post following threats”, Laarry’s News Room, has confirmed. In a WhatsApp-conversation with Laarry’s News Room, a highly placed source disclosed that the North West OCHA Head left the Douala airport in the evening of Sunday February 23, 2020, after taking refuge at the US embassy in Yaounde.
This was after receiving continuous calls from the Police and Secret Service from the Republic of Cameroon, a claim Cameroonian authorities are yet to comment on. This threats came after Jack Andrew exposed information about the Ngarbuh Massacre contrary to that of Government.

The first official to hold a press briefing a day after the incident in the North West Regional chief town Bamenda, went into hiding Thursday February 20, 2020, after he received a call from a highly placed Minister in Cameroon”
The information which was carried by Mimi Mefo Info on its Facebook Page https://web.facebook.com/1927380740639827/posts/2990388087672415/?_rdc=1&_rdr opining that “Bamenda UN Chief Exits Cameroon After Ngarbuh Massacre Press Conference … some say the press conference may have played a part in his departure from the country amid threats from government officials, the information has not been confirmed.”

The post made by the Facebook surfer Pirlo FT at the time of this report had been pulled down https://m.facebook.com/story.php?story_fbid=2530807290507558&id=100007349352315.
The UN in reacting to these social media beefing tweeted that Jack Andrew left at the end of his contract.

At the UN-OCHA office in Bamenda, they said Jack Andrew was never called by police officers and that he left at the end of his contract. They furthered that the information of Jack fleeing from threats is fake in its entirety.

Following the recent killings that took place in Ngar-Buh village, a locality in Donga Mantung Division of the Northwest Region on Friday February 14th 2020, Head of OCHA’s Sub office Jack Andrew held a Press conference where he requested that investigations be made as soon as possible. “This needs to be investigated, this needs to be understood, this needs to stop now…It brings a new dimension into the work because the people in northwest Cameroon are severely traumatized,” he furthered. Ngarbuh killings which left over 20 dead according to Human Rights Watch https://www.hrw.org/news/2020/02/25/cameroon-civilians-massacred-separatist-area a figure which government through the Minister Delegate at the Presidency in charge of defence dismissed as Fake news saying the death toll in Ngarbuh stood at 5, a woman and four children. The Ngarbuh incident has remained one of the most controversial in recent times.

Jack Andrew Pendleton has over thirty years of experience in humanitarian emergency program management, with over twenty-seven years in senior UN coordination roles serving as head of the office and principal liaison officer for host governments. It should be noted that he has for twelve years served in the UN OCHA, nine years in UNHCR, and eight years in the UN WFP.
Andrew has been replaced by ILHAM MOUSSA who arrived in Bamenda on the 27th of February 2020 to chant forward UN OCHA activities in the Region.

Partager la publication "No, Jack Andrew Pendleton did not flee from Cameroon due to threats"