Paul Kagame Did Not Offer Rwandan Presidency to Kamto 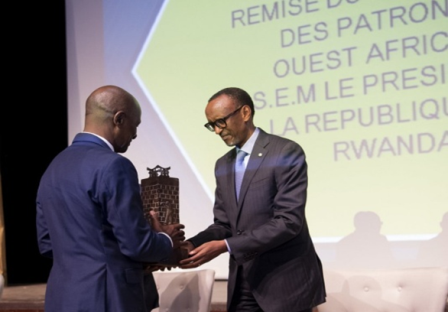 A quote allegedly from Paul Kagame, lauding Maurice Kamto, wishing he could offer him the post of Rwandan President and inviting Kamto to Rwanda in September 2020 is Fake News.

According to the post, unedited, Paul Kagame said “Cameroonians are fortunate to have a son like Prof Maurice Kamto. If he was in Rwanda, I would have voluntarily offer him my sit. I have decided to invite him in Rwanda in September 2020; He is a source of Inspiration and in that light, should be given a listening ear”.

At a first glance there were doubts of the veracity of such a quote coming from President Paul Kagame.

The use of tenses and construction of thesentences were not like that of Paul Kagame.

Tineye image search further reveals the original image, the date it was taken and the event at which the picture was taken.

It is also clear that some Photoshop had been done on the original image, covering the part of the rostrum that had the Rwandan Seal for the fake quote to be pasted.

TineEye Search leads this fact finder to a series of websites with the original picture which was posted in igihe.com with the following details and precision.

The website reveals that it was during a ceremony to award African Business Men by the President of Rwanda in October 2019.

An event where Ivory Coast and Rwanda had a media deal on exchange of radio signals amongst others.

Paul Kagame is pictured here handing a gift to an African Entrepreneur on the sidelines of the ceremony.

Rwandan President is pictured here on the same day and attire and same event in a group picture with African Entreprenuers.

The article was also shared four months ago on another popular Rwandan news website, http://rwanda.shafaqna.com/FR/AL/154515. At this point, we have had no traces of mentioning Maurice Kamto by President Paul Kagame at the event in which the picture was taken.

Not to talk of President Paul Kagame ever nursing a wish as handing over the presidential gown of Rwanda voluntarily or otherwise to Prof Maurice Kamto.It is therefore clear and founded that the post made by Mayor Cyrille, that went viral was fake news with intention to manipulate and make political gains by a staunch supporter of the MRC.