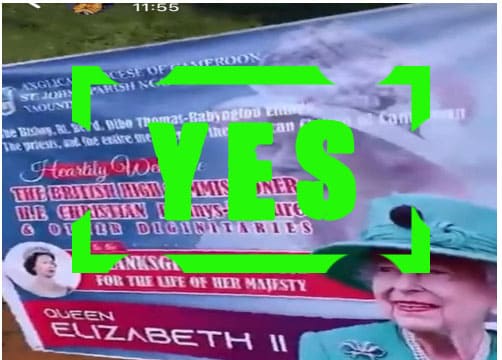 On Monday, September 19, 2022, a video showing people in a solemn procession with a poster bearing the face of Queen Elizabeth II, went viral on social media. The message that accompanies this image Cameroonians held a funeral the Queen Elizabeth II is that it is a funeral ceremony held in Yaoundé, Cameroon in memory of the late Queen of England. After verification, it is indeed a funeral tribute service in tribute to the late sovereign, organized by Anglican Church in Cameroon, St John’s Parish Ngousso-Yaoundé.

On Monday, September 19, 2022, a video showing people in a solemn procession with a poster bearing the face of Queen Elizabeth II, went viral on social media. This video or picture was followed by several others from the same event, showing that Cameroonians held a funeral service in Ngousso, Yaoundé, Centre Region of Cameroon in honour of Queen Elizabeth II. This video was shared severally on WhatsApp fora and carried by popular social media platforms such as TeboPost, Hettysmedia in Nigeria amongst others.

This video came at a time when African leaders were attending the State Funeral service of Queen Elizabeth II in London. However, we were contacted by fact-checkers from Burkina Faso, to find out if indeed this funeral for Queen Elizabeth II, took place in Cameroon.

On the poster carried by two persons in the solemn procession, it read the Anglican Church in Cameroon, St John’s Parish Ngousso-Yaoundé welcomes the British High Commissioner to Cameroon, Christian Dennys-McClure and other dignitaries to the thanksgiving service of Her Majesty Queen Elizabeth II. Ngousso is a community in the Centre region, 430km from Yaoundé Central.

Going through the internet, we found a cropped picture of the same event with the British High Commissioner and the Bishop. In their faces, were logos on microphones of media houses in Cameroon, where we recognized some. 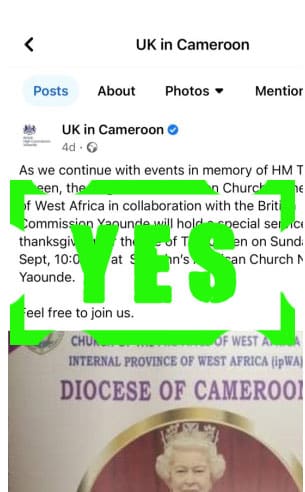 We therefore searched national Television handles on social media, where we saw the same event had been carried out by one of Cameroon’s leading private TV, Canal 2 International. We contacted one of the presenters of the bilingual newscast of the day, Henry Kejang, who confirmed that his media organ carried a report on the thanksgiving marking the Queen’s death. The report was carried by journalists Oummoul Koulsoum and Michel Foko, on the it’s 1pm news cast of Monday 19 September 2022.

The report indicates the name of the Bishop, Rev. Toklas Bibyngton Elango Dibo, as head of the Anglican Church Cameroon, same thing indicated on the poster from the viral video. Persons carrying the posters on both viral video and report from Canal2 International can also be easily recognized as being the same.

The Anglican Church originated from England in 1534 with the British Cameroonians held a funeral the Queen Elizabeth II Monarch as the leader of the church. The Anglican community in Cameroon therefore decided to honour the life of Queen Elizabeth in collaboration with the High Commission.