Handling: this is not the gunman who killed 7 people in Belel 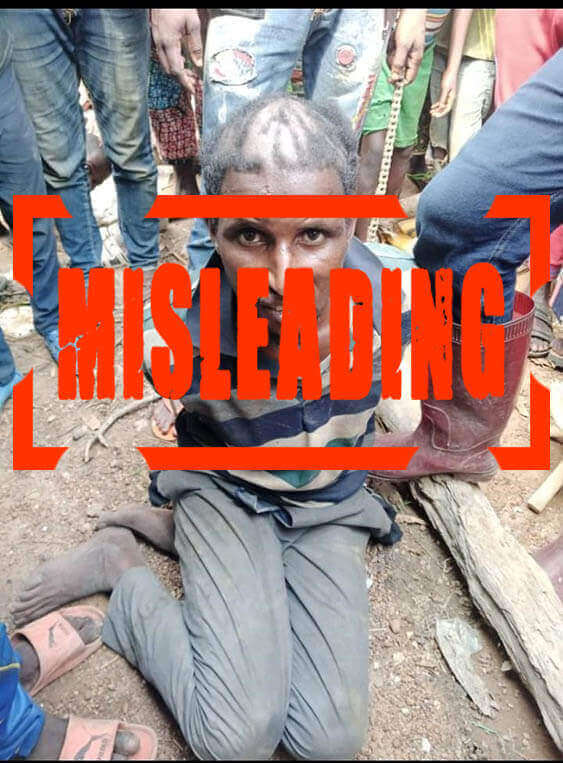 Handling: this is not the gunman who killed 7 people in Belel

An image that has gone viral in several WhatsApp groups has been presenting an individual as the serial killer that attacked and murdered seven and injured 2 in some villages of the Belel Subdivision in the Adamawa region of Cameroon. After verification of this image, it turns out to be misleading. The attacker is still at large.

On Wednesday 15th June 2022, members of the WhatsApp group faada Daga Adamawa woke up to pictures accompanied by a voice note in the fulfulde language widely spoken by Muslims and non-Muslims in Northern Cameroon indicating that the gunman who perpetrated atrocities in Belel villages on Monday 13th of June 2022 has been arrested by the defense and security forces in collaboration with the population. The 1 minute 30 seconds male voice note shared on the WhatsApp group with 590 members stated that « At 6 PM on Tuesday security forces and the population apprehended the gunman who has been killing people in Belel. Right now he is with us in Garga Libona. The man has not been wounded or beaten yet but we are currently asking him some questions about his motives behind the killings”.

The voice message was accompanied by an image that the publisher claims is that of the attacker. In the picture, the supposed gunman looks frail, hair partially shaved, hands tied behind and his shoes taken off. The man is seated surrounded by a group of individuals with no military person seen around. This same image published in the WhatsApp group Faada Daga Adamaoua was later on forwarded to another group GovinfosAd. This group has over 30 members that regroup journalists and some communication specialists of the Adamawa.

The post in this group sparked a wave of arguments as many contested the picture declaring that it was fake news and unfounded because the gunman is still on the run. The fake news in circulation also indicates that the supposed gunman was arrested in Garga Libona, a village situated in the Mbere Division of Adamawa.

Contacted, the Divisional Officer of Belel, Abbo Abdoulbagui through a phone interview, firmly stated that all declarations about the gunman being arrested are « simply unfounded ». He explains, “the armed individual who attacked several villages in my area of command on Monday 13th June 2022 is still at large. The last time he was seen by villagers was on that Monday in the Baraya area beside a local hospital. The murderer is still at large and vigilance must be redoubled by the population”.

To further demonstrate that the gunman is still on the run, we refer to a press release signed by the Senior Divisional Officer for the Vina Yves Bertrand Awounfac on the 16th of June 2022 concerning the killings. The second paragraph of the press release clearly states that « This despicable medium-sized criminal who expresses himself in fulfulde and Arabic is still on his way to an unknown destination ». The next paragraph reinforces this claim by stating that defense and security forces have been mobilized to stop the murderer from causing more havoc in the community. 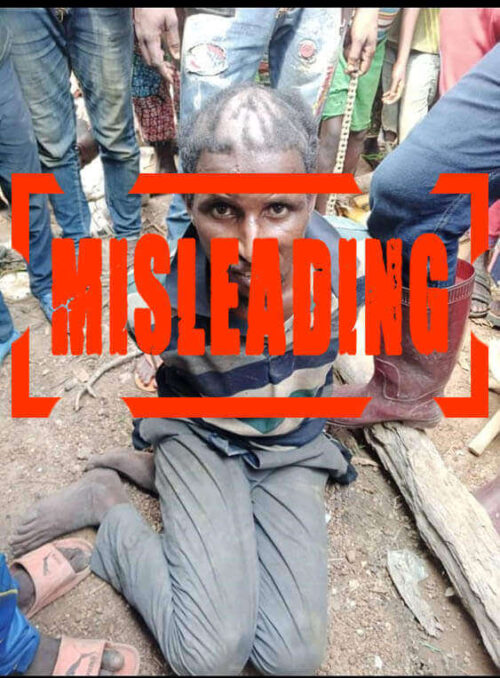 gunman who killed 7 people in Belel

The area where the gunman was supposedly apprehended is equally misleading. We get in touch with Oumarou Sanda, one of the active youths of Garga Libona village where the picture is believed to have been taken. Through a WhatsApp message, he says apart from an economic operator that was wounded after a gunshot on the arm on Wednesday the 16th of June 2022, no other incident has occurred in the village recently. He adds that they are simply suspecting the attacker of the economic operator to be the same serial killer of Belel but he has not been arrested. For now, no one knows the individual on the fake image circulating but Oumarou Sanda tells us “It might be the picture of a highway rubber that was arrested some months ago, but I am not very sure”

Even though using the reverse image search method leads to no major clue, a casual observation of the picture reveals it is misleading. Because, the entire Adamawa region now is characterized by heavy rains that water the soils with green vegetation observed all over. However looking at the picture and its surroundings, one will notice a very dry environment giving the impression it was taken during the dry season and under a scorching sun. All these simply lead us to say that the information about the arrest of the Belel serial killer is nothing but misleading for now.

According to Ibrahima, one of the survivors of the attack, the gunman arrived at the Gadawoka village on Sunday night well covered and pleaded for shelter. This was given to him by a good samaritan who was killed the following morning by the attacker after a heated argument. The six-year-old daughter of the house owner was also killed in the process. The serial killer then moved to Didjawa where he killed two other people including the Headteacher of Government Primary School Didjawa. In Didjawa, the armed man insisted to meet the village head but after unfruitful attempts he eloped, leaving behind 4 dead and 5 persons seriously injured. Three of the 5 people wounded will later die in the hospital. Two are still alive and according to the Senior Divisional Officer for the Vina will soon be evacuated to Yaounde for proper treatment. The armed man is still running to an unknown destination.

This fake news and the killings in Belel Subdivision come at a time when the Governor of the Adamawa Kildadi Taguieke Boukar is in Yaounde attending the second session of the Permanent joint security Commission and the 5th Ad Hoc trans-border Commission between Cameroon and the Central African Republic. This is one of several meetings held between officials of Cameroon and those from the Central African Republic to secure the long borderline between both countries. It should be noted that Adamawa shares more than 160 KM borderline with the Central African Republic. The porous nature of the border has often favored incursions from rebel groups who penetrate villages committing atrocities like kidnapping for ransom, cattle theft, and other forms of insecurity.

A lire aussi :  Handling: No student pregnant by a teacher in Ngaoundal

Partager la publication "Handling: this is not the gunman who killed 7 people in Belel"