Yes, Ambazonia fighters are still active on the ground despite a unilateral ceasefire declaration by SOCADEF 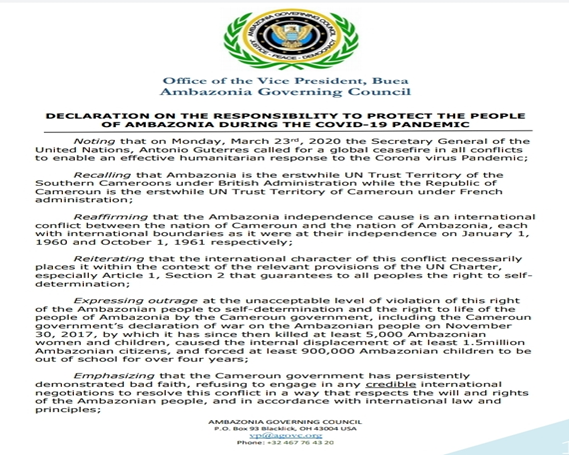 As opposed to a press release circulating on social media, pronouncing a unilateral ceasefire in Southern Cameroons in solidarity to the fight against the new coronavirus, by Ebenezer Akwanga, leader of Southern Cameroons Defence Forces (SOCADEF), fact-finding indicates that fighters of the separatist movement are still active on the field.

The Ambazonia Governing Council on the 29th of March 2020, in reacting to the announcement, published a press release counteracting the pronouncement of Socadef. The release indicated that « there shall not be a unilateral ceasefire in Southern Cameroons. If that must happen, both parties (Cameroon government and Ambazonia Governing Council), must agree to certain terms ». The council further called on the Ambazonia Defense Forces and allies to continue its defense against military offensive and aggression of the Cameroun government. 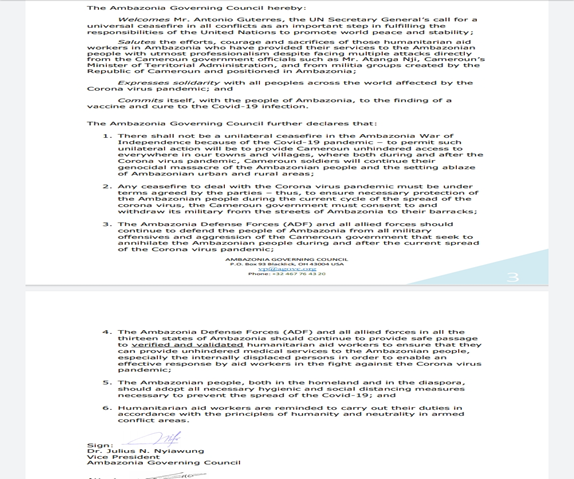 As reported by Journal du Cameroun, on the 30th of March 2020, members of the Ambazonia armed separatist movement, ambushed, kidnapped and killed a dozen including two Deputy mayors and a soldier in Oku, North West Region: https://www.journalducameroun.com/en/cameroon-at-least-12-ambushed-by-ambazonia-forces-in-oku/

Regarding the ambush in Oku, Mark confirmed that the act was carried out by Ambazonia Forces in Oku, not affiliated to ADF or SOCADEF.

Eric Tataw, Diaspora Ambazonia activist and CEO of the National Telegraph, also confirmed that SOCADEF has no capacity to proclaim a unilateral ceasefire in Southern Cameroons. “All soldiers of Ambazonia fight to defend the homeland. The Restoration forces are owned by the Ambazonian people”. Eric added

To Ebenezer Akwanga, SOCADEF has the right to call a unilateral ceasefire as each Ambazonia group is independent and can make decisions without consulting the other. “Any group fighting on ground zero can enter into a separate negotiation with the Cameroon government. We are separate individual groups fighting for the same thing”.

Though the fighting groups on the ground are interwoven, there have different leaders – AGovC-ADF by Ayaba Cho, IG Sisiku led by Yerimah, IG Sako led by Sako and SOCADEF with Ebenezer Akwanga as president. It should be noted that Tapang Ivo, spokesperson of the ADF was not available to talk on the subject matter.

On March 23rd, 2020, UN Secretary-General, Antonio Guterres made an appeal for an immediate global ceasefire to all warring parties so as to fight a common enemy – the new coronavirus. As a result, SOCADEF proclaimed its support for a unilateral ceasefire in Southern Cameroon while AGovC-ADF, IG Sisiku, and IG Sako are against a unilateral ceasefire.

From the above revelation, it is certain that the clarion call for a global ceasefire by the UN is not respected by parties involved in the armed conflict in the two English speaking regions of Cameroon. In addition, it is difficult to know which group still fights and which group has effectively stopped. The government of Cameroon is silent on the call for a ceasefire and continues its fight against the separatist fighters.

By Maikem Emmanuela Manzie in Bamenda

Partager la publication "Yes, Ambazonia fighters are still active on the ground despite a unilateral ceasefire declaration by SOCADEF"