Cameroon: Prohibited by law, but in practice allows the import of hazardous gas refrigerators. 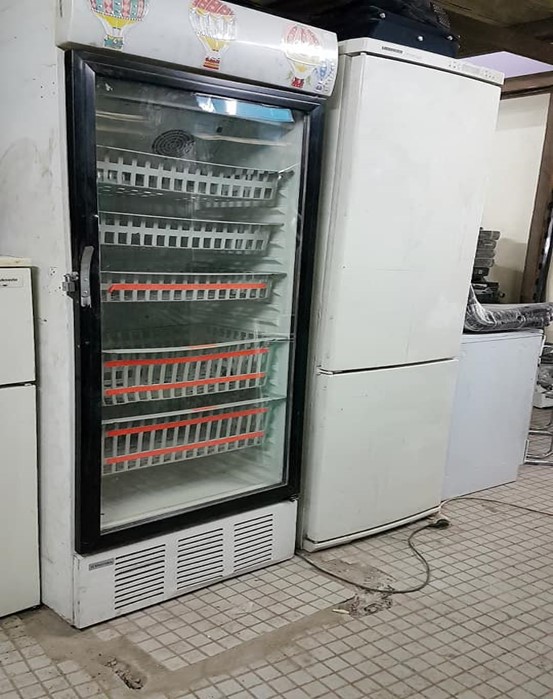 To protect our health and the environment, Cameroon has ratified several international conventions to ban the import of certain refrigeration appliances. However, neither the customs nor the environmental services at the borders prevent their entry and little effort is made by the central administration to limit dangerous refrigerators once they are put into use.

It is a little after 11 a.m. at the Edea road toll booth on National Road No. 3 linking Douala to Yaoundé, one of the busiest roads in the country and a corridor to some countries in the hinterland. Trade is in full swing; thirst can be seen on the faces of the people on this day when the sun is at its zenith since the first light of the morning. Traders rush to the dangerously dilapidated fridges and freezers. They take out cold drinks to offer to passing travelers. These freezers are just hulking without motors and other electronics that are usually found in a working refrigerator. However, they keep the drinks cool with ice cubes, just like a normal fridge. « This helps us a lot, because with the heat, customers ask for cold drinks, » says Pascal, 22, who has been selling drinks for five years to support himself and his family.

Like him, the ten or so traders we met in these premises obtain their refrigerator and freezer shells from several sources. In particular from scrap dealers, second-hand refrigerator sellers and used electronic appliances sellers. « Prices vary according to the condition and size of the fridges and freezers and can range from 2,500 to 10,000 CFA francs, » says Adèle, who has been using this route for 10 years. But in fact, this situation is only the end of a long chain of use of refrigerators and freezers from Western countries, sometimes in defiance of environmental standards and regulations governing the import of these appliances into Cameroon. Cameroon is heavily dependent on foreign trade, and refrigerators and freezers are one of the most imported electronic products in the country. These products are mainly resold on local markets.

Most of the shops selling used fridges and freezers can be found in Douala, along the street known as Équinoxe in the 1st district and also in Bonaberi at the place known as « avant carrefour musique. » Despite of the absence of data from the services of the regional delegation of Commerce for the Littoral, there are thousands of shops selling these products in Cameroon, under the nose of the Cameroonian administration.

Out of a sample of 16 such shops visited, 75% are resellers while the wholesalers are those in contact with networks established in the West, notably in countries such as France, Belgium, Germany, the USA and Canada. Although there are laws regulating the importation of second-hand appliances into Cameroon, the practice borders on disorder and defiance of the established order under the nose of those in charge of enforcing these laws. They enter the country legally, for which a tax is paid to customs for clearance. Thus, anyone can import the device they want, provided they pay the tax for customs clearance. « The goods come from several countries and the prices vary depending on the country and the price of customs clearance. A lot of things come in containers and the prices of fridges and freezers are set according to that, » explains a shopkeeper in one of the fridges and freezer shops on Equinox Street.

This trade is flourishing in Cameroon despite the dangers that end-of-life and inefficient second-hand refrigerators pose to the environment and society in general.

According to several studies, Cameroon, which imports refrigerants that are more than 20 years old, runs several risks, including some substances that are dangerous to life. Freon is an example. According to Géo, an online research platform, it « is not toxic in case of leakage or minor inhalation. However, when dispersed in large quantities, it replaces breathable air and causes asphyxiation. It can cause frostbite-like lung damage when inhaled in large quantities. The molecule R12 is also responsible for heart arrhythmia problems”. The study also states that « the biggest drawback of Freon is the environment. Under the effect of the sun’s rays, this gas is transformed into fluorine and chlorine, two substances responsible for the decomposition of the ozone layer, the stratospheric « shield » that absorbs a large part of the UV rays that are harmful to living beings. Freon is therefore a greenhouse gas and contributes to global warming”.

But traders say they are aware of the dangers of the refrigerant gas contained in the cylinders, especially the gas… « We have been told that gas is not good for health and the environment, but as it is not banned, we are just trying to make money, » says Astride, an importer of refrigerators and freezers. « But we know that the refrigerant gas is dangerous if it is released into the air, mainly through leaks from old inefficient refrigerators or by scrap dealers releasing it into the air, » he continues.

Most refrigerants have Ozone-depleting qualities. Ozone depleting substances (ODS) are halocarbons that contain chlorine. This chlorine reacts with ozone in the stratosphere and thus destroys the ozone layer. Most ozone is concentrated in a band 10 to 40 km above the earth, in the stratosphere. This layer protects us from ultraviolet radiation and its harmful effects.

Many sellers, these scrap dealers simply release these refrigerants into the atmosphere when they break up the used refrigerators to recover the scrap metal. Thus, without any conservation process in nature, they are found in bins, on street corners, sometimes in waterways during the rainy season. According to Noelle Kengne, a refrigeration and air-conditioning technician, there are better ways to dispose of or change these refrigerants. « There are two methods of changing refrigerants: either you use a reclaimer to recover your refrigerant, then you put it under full vacuum and recharge your system, or you flush the system, put it under full vacuum and recharge your system. Most of the time we just do the flushing because the refrigerant recovery unit is very expensive. But some technicians do it.  »

Although imports of these devices pass through several government departments, including customs, environment and trade, they are not subject to any technical control, including the determination of their components and quality according to one importer we spoke to. However, as per Cameroonian regulations the appliances should be checked on arrival. is in accordance with Law No. 2016/004 of 18 April 2016 governing foreign trade in Cameroon. More precisely in its ARTICLE 17 in Chapter III « Imported or exported products are subject to customs control. They may also be subject to technical controls ».

« Importers, once they have managed all the necessary administrative formalities, the goods themselves are not subject to any specific control to know if certain products such as refrigerators and freezers respect the different conventions ratified by Cameroon. The goods are simply sold, » explains Jonas, an importer.

Cameroon has in addition ratified several conventions that allow it to control and ban certain appliances on its soil. This is through the Vienna Convention for the Protection of the Ozone Layer. It was ratified by Cameroon on the 30th Aug 1989. It has been followed by several protocols and amendments signed by Cameroon including the Montreal Protocol. » The laws are being drawn up just to conform to international standards, » says environmentalist Paul Lodry Dongmo.

In other words, with regard to the conventions, treaties and protocols signed by Cameroon, the importation of these appliances is subject to regulation. However, these regulations are not applied by the administration. The controls are not very effective, even though some people are aware of the existence of these texts and the prohibited refrigerants and appliances that use these refrigerants.

Patrick, a refrigeration technician working in a workshop in Ndogbong in the 5th district of Douala has a perfect mastery of this phenomenon having studied it at school. Despite this knowledge, he says, « all the gases they use are not bad for the environment. This is why we can afford to let the gas escape when we replace it, since we don’t have adequate means of recovering the gas as in Europe, » explains Patrick. Today in Cameroon, many technicians and salespeople are unaware of the dangerous nature of the venting of refrigerants in the open. Many people wrongly believe that because these gases are used as refrigerants, they are consequently not harmful to the environment. This is the reason why they vent refrigerants into the atmosphere without worrying about the dangers. It would be important for the government to put in place a training and awareness program on the dangers of discharging refrigerants into the atmosphere so that all stakeholders are sensitized.

Several countries like France, UK, Germany, Norway and the USA from which these second-hand, used or obsolete cooling appliances originate from have ratified the Vienna Convention for the Protection of the Ozone Layer, the Montreal Protocol and the 2015 Paris Agreement. This therefore implies that such source countries must cease the export of such sub-standard or obsolete cooling appliances and honour their commitments to protect the ozone layer.

According to the regional delegation of the Cameroon Ministry of the Environment for the Littoral, only R22 refrigerant or appliances containing R22 are banned in Cameroon. Nevertheless, in reality, this ban is not enforced on the ground. R22 is a gas that is part of the hydrochlorofluorocarbons (HCFCs) used as refrigerants.

To defend itself, the government claims that they are mentioned in the Copenhagen amendment as gases whose production must be controlled. There are also CFCs (chlorofluorocarbons): R11, R12, R113, R115, R502 which are banned under the London amendment. The administration concludes that « the gases we use most are R134a, R15a, R143a, R152a, R404a, R410, R407 » which would then be less harmful to the environment and to humans. This would explain the government’s passivity mentioned above.

We also spoke with Mr Oumarou, a manager of a scrap metal depot located in the New-bell district in the 2nd district of Douala. He informed us that the scrap metals from refrigerators serve many things and are profitable to sell.  »We sell these irons to companies that deal in the processing of iron ». Thus, we can therefore understand where is what the cylinders containing the gases of its devices end up. Indeed, an article published on July 07, 2016, reports the fact that it is on average 60 billion scrap metal bought by industrialists each year.

According to the Association of Professional Refrigeration Workers of Cameroon, banning these types of refrigerators is already part of the action plan. The environment department of this professional grouping has already formulated recommendations to prevent importation of harmful cooling appliances for the protection of the ozone layer. « In coaction with the Ministry of Environment, we will be able to ban the entry into Cameroon of all fridge equipment and refrigerators that produce greenhouse gases, such as R12 and R22. They will be strongly banned from entering the national territory, » warns Flaubert Fogue Sop, a member of the association and also the general manager of a company in the refrigeration and air conditioning sector.

« This article was developed with the support of the Money Trail Project (www.money-trail.org).”