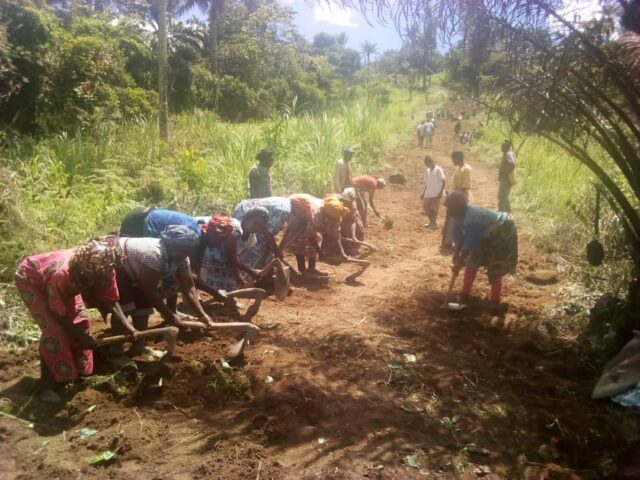 As the armed conflict in the NW/SW regions of Cameroon persists amidst heightened insecurity during which some contractors have had their equipment burnt by non-state armed groups forcing them to abandon work and  consequently resulting to a deteriorating road network, using rudimentary tools, villagers in Anglophone Crisis Roads Barehanded Mbengwi Central Subdivision, Momo Division have started digging their farm to market roads barehanded

Four years have gone by, roads folding up and seeing no sign of a return to normalcy any moment soon, most villages have reactivated the age-old practice of community work to maintain their roads or dig new ones. In Mbengwi, headquarters of Momo division in the North West (NW) region for example, instead of staying at home on Mondays meant for the observation of a ghost town as long enforced by activists of the anglophone struggle since 2017, villagers have been coming out in their numbers to dig a motorable roads.

His Royal Highness Njokem Awah is the « Fon » (traditional ruler) of Mbengwi village. DataCameroun met him on the field during a recent road digging exercise actively taking part in the activity. He says life isn’t easy first of all because of the anglophone crisis and now corona virus Anglophone Crisis Roads Barehanded. « I thank my subjects because instead of folding their arms and wait for a caterpillar, they have resolved to be digging their roads with their hands as was the case in the past till when things will normalize » added the fon.

For over half a year now, they’ve been digging the 1km stretch of road to link with Bessi Fomukong, a neighbouring farmland village and just a distance of about 300m is left to complete the project. While men and boys do the digging, women and girls provide food. The socioeconomic impact of the current crisis on the population has been back breaking. To the fon, « For now business hasn’t been moving considering that one of the main cash crops here is cassava out of which garri, water fufu and other byproducts are made. The Meta man as a whole is a producer of palm oil and because of the crisis, these products can’t be marketed Anglophone Crisis Roads Barehanded. The few buyers that show up offer very discouraging low prices. » This has increased hardship but despite being faced with such challenges, he still thanked his people for conserving peace and ensuring that they live in harmony.

Late last year, a combined inter village road rehabilitation project was also launched and spearheaded by three fons. On Mondays, over 300 villagers from Njindom, Wumnemburg, Mbemi, Guneku and Zang Tembeng used to come out en masse to dig their roads. This was during a politically sensitive period as the 9th February 2020 municipal and legislative elections were forthcoming. Unfortunately Anglophone Crisis Roads Barehanded, a calamity befell the villagers when on 13th December, two of the fons were kidnapped by non-state armed fighters locally known as « Amba Boys. »

The fon of Mbemi was accused of meddling into politics as his name appeared on the list of potential CPDM councillors to run the affairs of the Mbengwi council while the fon of Wumnemburg was accused of interacting with the military. The former was tortured in captivity and his left eye destroyed. Both were later released but the road Anglophone Crisis Roads Barehanded development project was abandoned and the injured fon absconded the throne. Since then till date, he has never passed again in his village.

Despite this isolated incidence, other villages have continued to dig their roads. Of recent, it was the clan head of the Meta people in Mbengwi subdivision, H.R.H Teghenicha of Zang Tabi village that has been mobilising his subjects to dig a 1km motorable road linking Njah-Etu, a neighboring village. Interestingly, mostly women and girls are the ones doing the digging. Most men and boys have escaped out of the village as they became targets for both the military and non-state armed groups. Zang Tabi and Njah-Etu are among the most enclaved villages in Mbengwi sub division.

The former mayor of the Mbengwi council, Tebe Beatrice during her Anglophone Crisis Roads Barehanded mandate secured a contract to rehabilitate some major roads within the central town of the municipality with pavement bricks. During the first quarterly meeting of the Momo Divisional Participatory Follow-up Committee for the evaluation of Public Investment Budget (PIB) projects that held in Mbengwi on April 21st 2020, the divisional delegate of housing and urban development, Mr. Anyang Gordon regretted that because of the inability of the contractor to bring his caterpillar to Mbengwi, the road rehabilitation project couldn’t be executed and as such, the credit card has been returned to the central treasury in Yaounde. 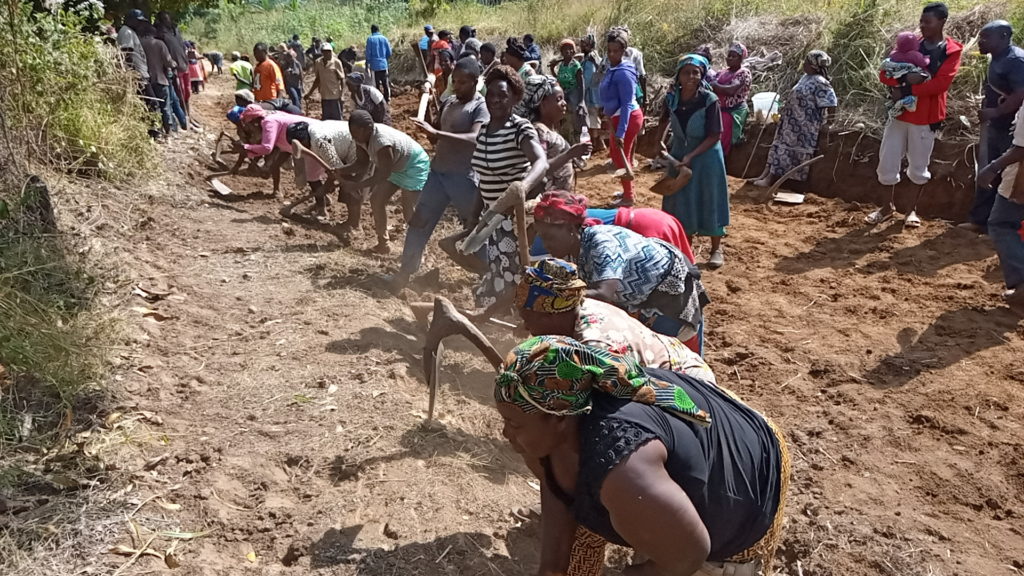 people of Mbengwi at work

Road construction companies in the N.W region like Edge, Dreamland and Kendely have severally come under attacks from the fighters who often demand for a huge share of the contract budget and should the contractor fail to comply, either his equipment is destroyed or his workers kidnapped in exchange for ransom or even killed and the work forced to stop. Some have incurred losses estimated in hundreds of millions as their caterpillars and other equipment were burnt or destroyed. As a result Anglophone Crisis Roads Barehanded, most of such companies have laid off workers due to no salary, they no longer recruit and they don’t take contracts out of Bamenda central town. Unfortunately, none of the companies contacted could react to the subject. All are now keeping sealed lips to avoid any utterance that may further jeopardize their already precarious situation.

In Mbengwi central subdivision, Momo division in the NW region of Cameroon the road network is deplorable. In 2018/2019, they were further destroyed by separatist fighters who mounted barricades with heaps of stones, trees they fell across and, in some instances, they set piles of used tyres or dry wood ablaze on the road. In other areas, they also pulled off plank bridges, divided the roads into two and at times they buried fetish objects across.

These fighters had imposed themselves as liberators of the anglophones from francophone « colonization ». The road destruction tactics according to them, were to block the military from penetrating the Anglophone Crisis Roads Barehanded villages to torture, rape and kill the locals and burn down such villages hosting non state armed groups. As a consequence, all road construction projects in Mbengwi just like in other rural and even urban areas were abandoned. The fighters themselves have not maintained any single road.