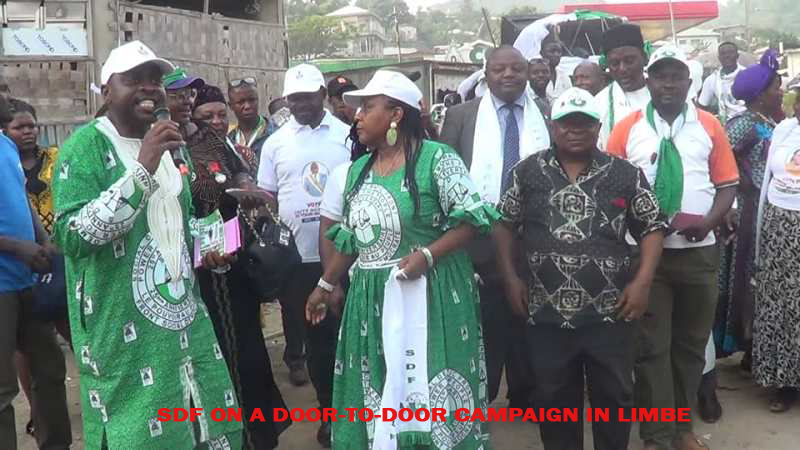 Four political parties were in the race to win the 15 parliamentary seats and 31 councils in the region that has been in socio-political turmoil since 2016.

As a build-up to the twin legislative and municipal polls, political parties vying for seats in the National Assembly and local councils have been in the field since January 25 wooing potential voters.

In the restive South West Region, where a socio-political crisis erupted since 2016, leading to deadly confrontations between armed separatist fighters of self-proclaimed “Ambazonia republic,” government forces, the political environment is not as buoyant as in other parts of the country (except North West Region also experience same crisis). “Ambazonia” separatist fighters have declared that no election will hold in two-English speaking regions while the government, through the Minister of Territorial Administration, Paul AtangaNji says elections will take place in all the 360 sub-divisions of the central African country.

It was the CPDM party that took the lead on January 25 to launch the regional campaign in the South West Regional capital Buea under the leadership of former Prime Minister, Peter MafanyMusonge who is the party’s permanent delegation leader for the region.

The message at the regional campaign rally was clear “win all the 15 parliamentary seats and the 31 councils in the region.

Musonge also enjoined the inhabitants of the region to shun fear and come out massively to vote for the CPDM lists. The CPDM campaign in the region also got back-up from the Central Committee Secretary General; Jean Nkuete who held a party rally in Limbe.

Another booster came from the Prime Minister, Head of Government, Joseph Dion Ngute who after visiting sporting infrastructure in Limbe/Buea sites for the upcoming continental competitions, held a political rally at the Buea Independent Square. Not only did he enumerate the achievements of the government in the region but also announced giant projects which the population of the South West have been yearning for such as the Limbe Seaport amongst others. The PM further called on the population of the region to shun calls for boycott, lock-down and ghost towns and turn up massively to vote. Apart from these mega rallies, CPDM through its divisional and sub-divisional structures have taken campaign messages to all nocks and crannies of the division despite the precarious security situation in the region.

The SDF came out very strongly in Limbe when Fako East constituency hopefuls, Hon Fritz NgekaEtoke and Emma NanyongoLebaga just like other district officials to launch their campaigns in Limbe, Tiko, Muyuka, Buea and Kumba where they are competing.

The Etoke-Lebaga team vying for Fako East constituency says “A vote for the SDF is a vote for change, competence, proximity and dedication to community service. Hon Etoke who is ending his first mandate under the CPDM ticket for the same constituency, states that the SDF party’s vision is hinged on peace, social justice, health ,education, sustainable development, youth and women empowerment. In Buea, the SDF parliamentary aspirant, Barrister IkomeNgongi holds that “Buea Urban constituency needs an MP who can effectively defend their interest anywhere and anytime. To him, the CPDM has been holding the parliamentary seat for 20 years with nothing to show as achievements as the Buea Central market remains an eyesore while inhabitants of the city go for days without potable water.

On his part, Dr Benz Bate Enow also launched campaigns for his CDP party after braving the odds to travel to Mamfe where he is contesting for the council and parliamentary seat. He narrated to this reporter how his convoy was attacked by armed separatist who attempted to block him from entering Mamfe.

He succeeded thanks to the security forces that accompanied him and his team.While launching campaigns in Mamfe where he is eying the parliamentary seat for Mamfe Central, Dr Bate says “CDP calls for a change in the status quo in Manyu Division. He says Cameroon Democratic Party stands for youth empowerment, infrastructural development and fight against the embezzlement of public funds. “CDP campaign is based on peace change and the conservation of national unity,” he told this reporter on a telephone conversation.

Given the perilous security situation in the English-speaking regions, all the four political parties vying either for the 897 councillors or 15 seats at the National Assembly in the South West Region have adopted the proximity approach to woo potential voters. Amidst calls for “No election” in ‘Southern Cameroon’s’ and a six-day lock-down (February 6-12) imposed by separatist fighters, political parties are braving the odds to pass across their campaign messages to the population. All the parties are making use of the door-to-door, streets walk, markets, car wash points and cabarets to meet potential voters.

In Tombel for example, the CPDM campaign leader, Minister Elung Paul Che told reporters that strategies have been put in place to ensure massive turnout at polling stations. Such strategy includes door-to-door approach and street walk to convince voters.

The CPDM parliamentary hopeful for Buea Urban, Magistrate MalombeEsembe met with youth in some car wash points in Buea where he assured them his support once elected. Just like his SDF opponent, the 34-year Malombe also took his campaign message to markets in Buea. In Mamfe, CDP’s Dr Bate combs streets of the town and the main market to sell his party’s ideology and to convince potential voters to cast their votes for the CDP. He later took his campaign messages to streets of Akwaya where CDP is competing for the Council and Lebialem Division where it is gunning for the parliamentary seat. Apart from door-to-door strategy, SDF’s Etoke-Lebaga team has also taken campaign messages to cabarets and night clubs, which is one of its kinds in electioneering in the South West Region.

Reports from Idenau, West Coast District in Fako Division where the NUDP is running against the CPDM for the council states that the party adopted door-to-door strategy to woo voters. Our source stated that the NUDP officials have not held public rallies but are working on the ground to canvass for votes. Attempts at getting the head of the council list, Nganko Peter Bolonjo on phone were futile.

Since campaigns for the February 9 double polls opened on January 25 (15 days to polling day according to the country’s Electoral Code), the social media has been awash with campaign materials from different antagonists using different platforms; Facebook, twitter, WhatsApp, and YouTube amongst others.