Mangrove: The Fako coastline records a loss of 1 642 ha in 30 years 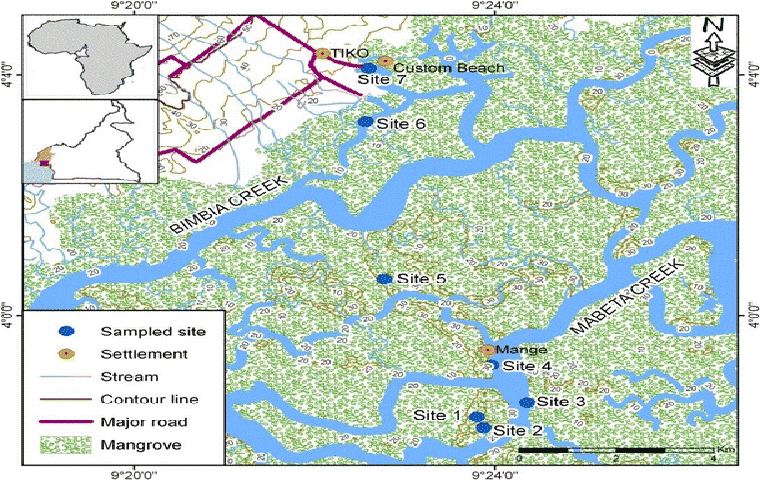 Mangrove: The Fako coastline records a loss of 1 642 ha in 30 years

On the basis of the data obtained from the timber operator at least 234 tons of mangroves are harvested per month in Tiko,of the South West Region, given that a minimum of 3 truckloads with 3 tons of wood are harvested. This recent trend adds to the 1642 ha of mangrove land lost by the same area between 1986-2016 according to the Voice of Nature, a local environmental advocacy organisation Mangrove Fako coastline.

A typical day in his life starts at 5:30 AM, when he gets up and prepares to go to the beach. From 6 AM, he starts work on wood brought in the previous night by harvesters. He splits or shops the wood depending on the demands of his clients.

It is a business that is not very profitable, but that has enabled him to take care of his wife and three children. While most of those involved in splitting and chopping wood are temporal, Shey and a few of his mates have spent more than two decades in the area.

Motombolobo, a beachside neighbourhood, in Tiko, one of the seven Sub Divisions that makes up Fako Division of the South West Region, Cameroon remains the main hub for the harvesting and selling of mangrove wood locally called ‘matanda’ in Tiko in particular, and Fako Division in general. Entering the community from any direction, the most popular item one will likely see there is mangrove wood, harvested and turned into firewood. The firewood is then exported to other communities in Tiko as well as other towns in the country.

Denizens of the area attest that the wood is used as fuel for cooking, roasting fish, smoking fish as well as baking as they say it is cheaper, available and lasts longer than other trees.

Fishmongers on their part, hail the wood for the flavour and colour it gives fish when smoked. The brown colour on smoked fish, fishmongers say gives them an edge with their rivals Mangrove Fako coastline.

Shey explains that between 3 and 5 dyna trucks are loaded to full capacity with mangrove wood on a daily basis in the area. “Each day, we fill a minimum of 4 or 5 dyna trucks, but on very bad days, we manage to load less. We work here six days, with Mondays non-working days,” he said.

Our rough calculations reveal that at least 234 tons are harvested a month in the area, given that a truckload of dyna weighs 3 tons. Thus a minimum 3 trucks per day, equals 9 tons per day, in this light, excluding Mondays, we have 26 days in a month multiplied by 9 tons per day, will result in 234 tons harvested

This fluctuation in the business is attributed to the changes in sea tides in the area. “…we depend on the sea tides, when they are high enough the harvesters go out and when the tides are low, few people go out to the sea to harvest”.

David Manjanga, the president of the Tiko Mangrove Harvesters’ Association, a veteran in mangrove harvesting in the area, says they have a team of 26 harvesters who go harvesting on a daily basis, except on Mondays.

Shey also explains that choppers and splitters of wood at the beachside make between 52,000 and 104,000frs per month from a summation of their daily incomes.  “On a daily basis, one can get between 2000frs and 4000frs on difficult and better days respectively”, he added.

The income earned by choppers and splitters is dwarfed by the earnings of harvesters and retailers according to studies who earn between 400,000 francs and 100,000 the sale of mangrove wood a month.

This reduction in revenues the choppers attributed to corruption, which drains them dry. “We pay a lot of money to different people in the control chain from Douala, and here we pay a fee to the forest officials, and to the council, so at the end, the majority of our earnings end with these people”.

Ewumbwe Njie, the Secretary General of the Tiko Traditional Council and Quarter Head of Motombolombo, explains that he has been observing the harvesting of Mangroves for the past 30 years and its decrease. He regrets the fact that his community has been harvesting the mangroves without replanting, thus depleting the entire ecosystem. “We have been here for about 30 years harvesting “matanda”, without planting resulting in a decrease thus, the matanda has decreased thereby affecting our fishing activity. It has reduced on our side but the harvesting has moved to Lake Manoka area”.

Njie, regretted that the over-exploitation of mangroves in the area had forced harvesters to go as far as Manoka (Douala VI Sub Division), in the Littoral Region to harvest mangroves to feed the growing demand for wood from their growing clientele.

The same report indicates that the mangrove dynamics in the Rio del Rey estuary shows a substantial decrease in mangrove vegetation cover from 1018.19 km² to 934.19 km² that is a decrease of 8.25%. This also shows that the settlement increased by 57.34 % and agricultural land increased by 39.24%.

Mangroves along the Fako coastline, according to Ndimuh Bertrand, the Chief Executive Officer of Voice of Nature, a local environmental advocacy organisation, have undergone a drastic and disturbing decrease within the last 20-40 years caused by factors; human activities in coastal areas such as physical alteration of the habitat, overexploitation of the resources, and pollution cause significant pressure on the environment. This between 1986-2016, stands at 14%. In 1986, the Fako coastline had 11940 hectares and by 2016, it stood at 10300 hectares, meaning a reduction of 1642 hectares, something the activist said was alarming Mangrove Fako coastline. 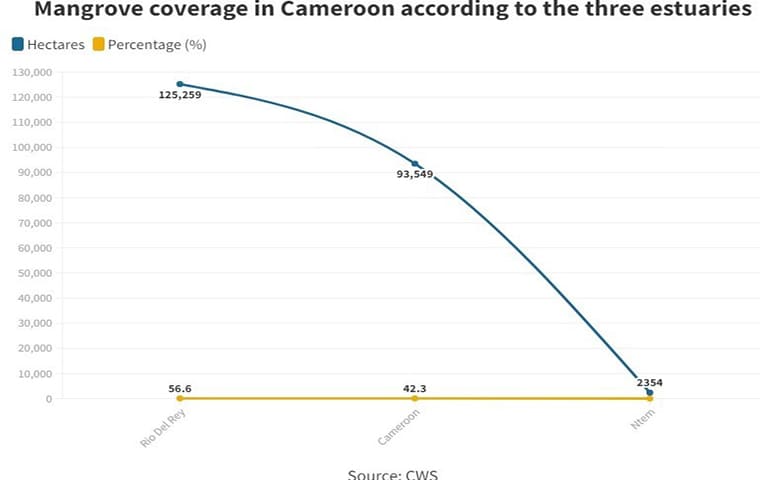 In a 2021 article published by the American Journal of Water Science and Engineering,  Usongo Patience Ajonina, Tepoule Nguéke Joseph, Chang Linda, in trying to assess flood vulnerability and flood risk management along the atlantic coast of Limbe, Cameroon, the consequences of mangrove depletion,  include floods which impact communities mainly through the destruction of buildings, destruction of crops, prevalence of waterborne diseases, loss of lives, displacement of households, damages to household property, increase crop growth, pollution of well water and destruction of roads.

Professor Beatrice Fonge, a Biodiversity and Ecosystem Management Researcher working on the Mangrove Ecosystems, attributes floods to the devastation of the natural barriers against floods like mangroves with both direct and indirect impacts on communities. The harvesting of mangrove results in change in tidal flow, pollution, and weed invasion on coastal communities. “Continued loss of mangrove forests will have serious ecological and socio-economic impacts, which are disproportionately felt by coastal communities that rely directly on mangrove products and services for their livelihood, because mangroves ideally act as natural barriers against floods, their depletion leaves these communities exposed” 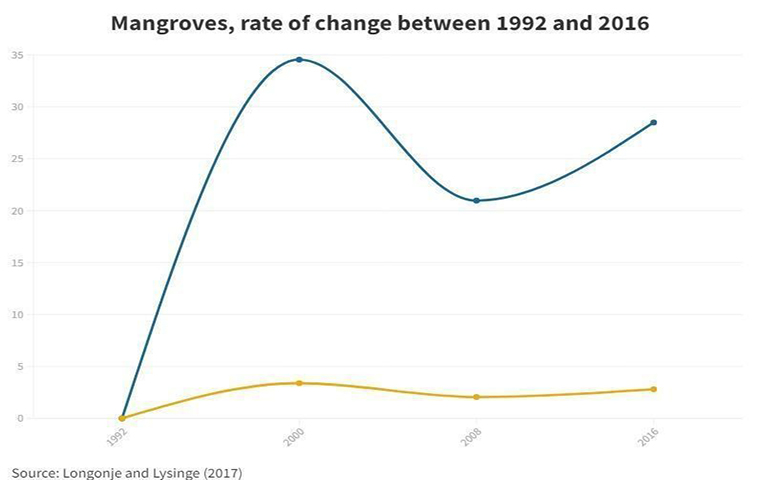 Professor Fonge asserts that the causes of Mangrove depletion along the coast of Fako include: urbanisation; creation of heavy industries notably SONARA and CDC. These industries, she said, contribute to mangrove depletion with pollution caused by industrial and domestic waste dumping.

Since most fishes, including shrimps grow under mangroves hiding from predators, without them now, she regretted that the supply of seafoods will reduce. “We will now start seeing that our fish is limited and you don’t only expose it only on the terms of their reproduction and growth from a juvenile to adult, you also expose them for competition, other organisms bigger than them eat them up.” explains Professor Fonge

What Action to Save the Rio Del Rey Mangroves?

Mangroves according to Kimeng Waindim Rudolf, 4th Deputy Mayor Tiko, Council, are very helpful in capturing carbon dioxide, however, without a viable partner at the level of the Council now, there is not much that they can do. “We had a project to conserve mangroves, with a partner, but the partner has been dormant. Conserving the mangroves entails a lot of finances, because it involves employing guards, people to monitor and follow up, because without follow-up, people fell every wood,”he said.

Despite the challenges, he insisted that the Council has employed staff at the beach where the mangrove wood is sold to monitor and control what is sold there. “What we do now is that we have council staff who control the wood at the beach,” he said, expressing his wish for partners to ensure the Council protect and preserve mangroves Mangrove Fako coastline.

According to Professor Fonge, there has been a new impetus in the coast of Fako for stakeholders like fish smokers, fishermen, wood exploiters, sand extractors, agriculturalists, and industrialists at different levels to reverse the trend. She think, saving mangroves warrants appropriate separate legislation for mangroves, incorporation of multidisciplinary approaches to management, building organisational and functional capacity of fishermen and other mangrove exploiters, carryout community-based tree planting schemes for restoration and the creation of effective partnerships to support participatory mangrove management, as measures to arrest massive mangrove depletion.

The 1994 forestry law and the 1996 environmental law of Cameroon remain the guiding legal framework for biodiversity in Cameroon. These laws need to be enforced while the protection of mangrove ecosystems should be incorporated into these laws.

She also suggests that national mangrove sanctuaries or protected area status should be granted to mangroves such that exploitation of all forms and expansion of settlements into mangroves is prohibited to arrest mangrove degradation.

The Buea-based NGO, Environment and Rural Development Foundation ERuDEF, in 2022, launched a project to support island communities in Tiko and Limbe III, conserve their mangroves, by preserving 5000 ha of forest reserve the mangrove ecosystem. The project according ERuDEF will run for 25 years  and protect 5000 ha of a forest reserve that will serve as a no-go zone for the protection of the mangrove ecosystem, and the creation of local management institutions for these Tiko-Limbe 3 island communities Mangrove Fako coastline.

According to David Manjanga, most of those  involved in harvesting mangroves insist that they do it for want of sustainable sources of income. In this light, stakeholders in conservation can provide opportunities to people in these coastal communities to have jobs. As the dictum says a goat feeds where it is tied, effective conservation must go hand-in-gloves with improving the livelihoods of coastal people.

This investigative journalism study was conducted in collaboration with the daily newspaper, The Guardian Post  and DataCameroon, as part of the Open Data for Environment and Civic Awareness in Cameroon (ODECA) project, put into place by ADISI-CAMEROUN. It is funded by the Centre for Investigative Journalism (CIJ) of the University of London as part of its Open Climate for Reporting Initiative (OCRI).