Mbengwi: Medics risking their lives to save lives 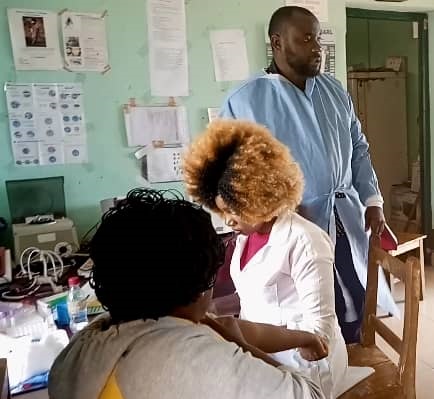 In the course of the ongoing armed conflict in Anglophone Cameroon, not only have health personnel been attacked, some have actually been killed.

« We are working without protection and that’s why we are scared. There are days you can’t get out of your bed when there are shootings because the bullet does not identify a nurse. » Medics in Mbengwi, Momo Division in the North West Region of Cameroon have been risking their lives to safe lives yet their efforts seem to go unnoticed. To better understand the plight of medical practitioners working in this conflict hit sub division, www.datacameroo.com  recently paid a visit to the Mbengwi District Hospital where the few remaining nurses have been tirelessly rendering their services to the community.

Madam Appo Gladys is the Service Manager and has been working here for over nine years without much challenges not until 2018 when the ongoing Anglophone Crisis went sour. She told us that because of the crisis, all health care providers became scared especially after two of them were supposedly assassinated by the military and days after, colleagues who braved the odds to go carry their corpses almost lost their lives too.

Njong Patrick and Azah Nancy were a couple, both nurses working as Chiefs of Centre in two separate Integrated Health Centres in Mbengwi, precisely Kob and Njah-Etu. On the 11th of August 2018, they were arrested in Tad market, Nyen village on their way back from the farm on a motor bike, blind folded, hands and legs tied, then shot at. Several online sources like http://www.cameroon-info.net/article/military-kills-pregnant-nurse-and-husband-misaje-do-dies-in-hospital-326316.html reported the macabre act and government forces were accused of being responsible.

It was after this incidence that nurses and doctors in Mbengwi especially the Francophones who feared being targeted had to run for their dear lives. Most healthcare providers in the region started seeing themselves as endangered species. Going by international laws, health facilities and medics are to be protected during armed conflicts but unfortunately some of them have rather been attacked by both state forces and armed separatist fighters.

Before the conflict, the Mbengwi District Hospital had a staff strength of about 40 but today, there are not up to 6 government paid workers left. Even when new doctors and nurses are posted to Mbengwi, they refuse assuming their functions. As such the hospital now has been forced to recruit a few nurses and doctors from its meagre budget.

Despite the challenges especially coupled now with the global outbreak of COVID-19, Madam Appo Gladys and her few colleagues have remained on the ground. « Though working under such conditions, we don’t have risk allowance, no motivation » she told www.datacameroon.com  and wished the Ministry of Public Health could give special consideration to its workers in the NW/SW regions. She pleads even with the administration and the local community to help them in any way they can as they go about saving lives.

Several gun battles have been taking place in Mbengwi between the military and separatist fighters, at times near health facilities. Madam Gladys explained that « We are working without protection and that’s why we are scared. There are days you can’t get out of your bed when there are shootings because the bullet does not identify a nurse. » Despite the risk, she hasn’t escaped like some of her colleagues. Asked why, she said it’s because nursing is her call and she has passion for the job, to save lives. In addition, she’s an indigene of the area and so has no other place to run to.