Covid-19: 1 122 children vaccinated in June at the regional hospital Bamenda 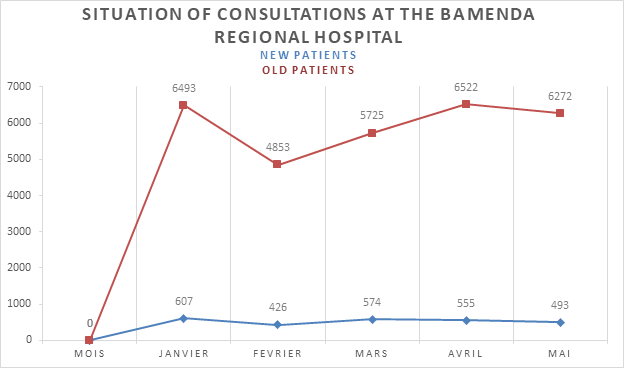 After a slight drop in May which registered 774 children, parents in Bamenda still respect Immunization calendar despite the outbreak of Coronavirus. According to the data, the separatist conflict is more of a threat to the vaccination of children than the dreaded Covid-19.

Corona virus since its outbreak has remained a serious health threat the world overand has crumbled its economy. The denial syndrome has remained high among the population of the Northwest Regional and Bamenda in particular hence, there has been a high rate of misinformation about the virus and the Regional Hospital Bamenda. This has greatly affected the hospital as many people shy away from the hospital. Many would’ve imagined that mothers are equally shying away from the Regional Hospital Bamenda but it is the Contrary. 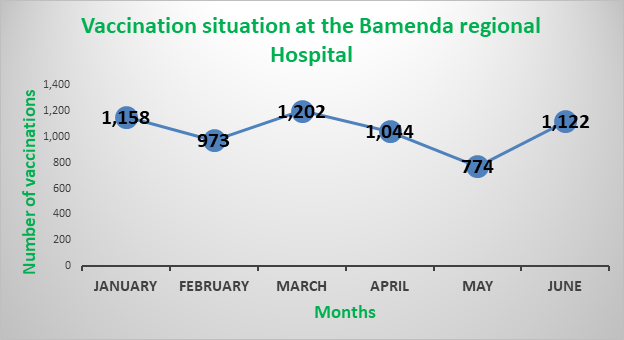 Talking to Mrs Chambo Rosemary Unit head for the Expanded Programme on Immunization and Infant welfare center at the Regional Hospital Bamenda, she reiterated the fact that the Immunization routine for children was greatly affected by the ongoing Sociopolitical tension in the hit Northwest and Southwest Region but with the coronavirus, a good number of the mothers coming to vaccinate their children “we have been affected since the sociopolitical crisis started and with the outbreak of the coronavirus we have witness a mild drop in parents coming which cannot be completely blamed on the virus but also coupled with the frequent ghost towns and lockdowns. I can say that the mothers and guardians are bringing their children for Vaccination and we have equally grouped them in such a way that we don’t experience overcrowding on Vaccination days.”

The drastic drop in February cuts across to consultations in the hospital too reasons being that it is the shortest Month in the Calendar with 29 days for this leap year and four Mondays of those 29 days are traditional Ghost town days instituted in the Northwest and South west by Pro-Independence fighters which has a great effect on the movement of the population to access health services and carry out their businesses. Also, the month of February is often characterized by series of activities leading to the Youth day celebrations which takes place every February 11th. All the activities were frustrated by lockdowns which greatly affected the hospital.

As for that of May, Mrs Chambo indicated that the level of misinformation about the hospital going on social media and the community could have account for. But I think the dynamics are changing as you can see we had an increase in June and we are hoping that July will be much better” Mrs. Chambo furthered.

On the importance of Immunization, Dr. Chebo Cornelius coordinator for the Expanded Program on Immunization EPI for the NWR indicated that it is very important for parents or guardians to take children for routine vaccination for it fights against viruses when they attack their system “when the Immune system of a child is stimulated, any infection that comes there is fought. Most children before the age of 1 suffer from a lot diarrhea diseases and respiratory tract infections that usually kill children before the age of 1 that is why the World Health Organization and the Cameroon Government made it possible that a vaccination programme is put in place so that children are vaccinated.” Dr. Chebo indicated that the first which is very visible is polio which affects the limbs of children so the vaccine against polio is given at birth, BCG is equally given at birth which helps to protect the child so that the child will not have the complicated types of TB and as the child ages, other vaccines are added like the Diphtheria , Pertussis, Tetanus and Haemophilus influnzae and many more so that the child is prevented from other diseases like measles and Yellow Fever.

It should be noted that general consultation at the Regional hospital Bamenda Director Nsame Denis remarked has greatly been affected by the spread of fake news offline and online. The first case arrived the Northwest Region on the 23 of March but the virus actually hit the region in the month of April. As can be seen below on the data visualization chart, consultations and admissions have been affected.

Between April and May, the hospital witnessed a drop in consultation from 6522 – 6272 which means that the hospital lost 250 clients.

The reasons that can be advanced for the drastic drop in February which happens to be a month before the health crisis can be linked to the fact that the month is the shortest and was characterized by series of ghost towns and lockdowns due to the sociopolitical upheavals in the Region. However, the Director of the hospital indicates that the request for the COVID test by the population is a positive sign that the people are becoming conscious and prefer to know their status.

As of June 30th, the Regional statistics stood at 497 confirmed cases in 12 out of the 19 health districts in the Region which includes 5 in Bali Health district, 360 in Bamenda Health District, 4 in Batibo HD, 62 in Fundong HD, 4 in Mbengwi Health District, 1 in Ndop HD, 12 in Santa HD, 9 in Tubah HD, 3 in Wum HD, 9 in Kumbo East HD and 14 imported from out of the Northwest Region. Out of these confirmed cases, 66 are currently being linked to treatment, 259 are currently on treatment with 15 hospitalized {7 on oxygen}, 40 in the quarantine center and 204 at home. 121 have recovered and the Region has registered 51 deaths {45 in Bamenda and 6 in Mbingo}. Out of these deaths, 14 occurred in the hospital while 37 occurred in the community.

1 thought on “Covid-19: 1 122 children vaccinated in June at the regional hospital Bamenda”