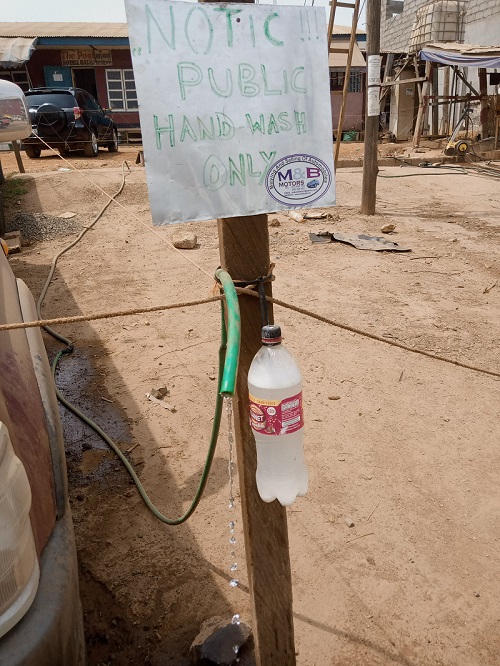 Following the global outbreak of the novel Corona Virus Disease, COVID-19 with increasing cases being reported in Cameroon, preventive measures to curb its spread are being intensified in the N.W region.

Though at the time of this report no confirmed cases have been reported in the region according to official medical sources, authorities, institutions and the media have been living no stone unturned in intensifying sensitization campaigns, considering that people keep travelling in and out of the NW. The regional delegate of public health, Dr. Kingsley Che Nsoh on Saturday 21st March 2020 launched a two weeks screening campaign at the toll gate in Matazem, Santa sub division for all passengers entering or going out of the region.

Cameroon’s Minister of Public Health, Dr. Manaouda Malachie has been tweeting increasing figures of confirmed cases in several towns and by March 30, the figures were above 100. N.W governor, Adolphe Lele Lafrique on March 22nd issued a regional order regulating the exercise of some liberties and activities within the framework of the response plan against COVID-19 in which he limited the freedom of movement of persons and goods and the exercise of socio-sportive and profit-making activities.

The Bamenda Regional Hospital has been on high alert to track down and contain any corona case. A center called the Solidarity Ward has been made available with three isolation rooms, a nursing station, plus toilets for staff and for suspected Corona virus cases. Besides these precautions, the population has been tasked to follow the WHO prescriptions of constant hand washing with clean running water and soap, frequent usage of sanitizers, wearing of masks and gloves, keeping of at least a metre distance with others just to name these few.

Organisations like SisterSpeak237 and private business institutions like Bobo Leenox Arts have also been contributing their own little quota to prevent the spread of the disease through donations and street sensitization campaigns.  At the entrance of almost every business place now in Bamenda is a water filled bucket, cup and soap. While individuals provide such at their business sites, the city authorities have also been installing the mobile hand washing taps at public places like markets.

Khan Marshall is the president of the Mbengwi Driver’s Union. He says instructions have been given for all the drivers plying the Bamenda-Mbengwi highway to now transport just 4 passengers per journey, 3 behind, 1 in front and to wear nose masks as they go about their transportation business. To facilitate this, Marshall added that the union bought hand sanitizers and nose masks and offered to all the drivers.

Awah Matthew is a barber in Mbengwi. Very much aware of the dangers of COVID-19, he’s put in place preventive measures in his shop. He now wears a nose mask, gloves and disinfects his hands plus those of his customers before commencing shaving. Amah Michael, a Mbengwi-based bike ridder on his part now goes about his transportation business putting on a nose mask. Therefore, almost everyone in the N.W is aware of COVID-19.

Unfortunately, a vast majority of the population is yet to follow the safety measures. There are those who still take things for granted. To such, COVID-19 is not different from the bird flu outbreak which the government reported in 2016 and to them, since nobody died from eating eggs and chicken, it was fake. Markets in the N.W are still overcrowded. The 1m distancing is not respected. Many still lock themselves up in bars after 6pm to continue drinking. In front of banks and ATMs, customers continue to cue up to cash in or out. Public transport cars have continued to overload. The drivers say they must do so in order to « settle » (bribe) the numerous checkpoints on the road.

Since after the March 22 parliamentary election rerun in the region, gun exchanges between armed separatist fighters and the regular army are said to be decreasing. Both seem to be yielding to the call of the U.N Secretary General, Antonio Guterres for an immediate global ceasefire in all corners of the world. « It is time to put armed conflicts on lockdown and focus on the true fight of our lives » Guterres said. Leaders of the Ambazonia struggle have also added their voices to the campaign by encouraging people to stay at home.

The media in the NW region has been putting up a strong fight against COVID-19. All the radio stations have been talking about it, some have produced special promos while others are broadcasting promos produced by the Red Cross and Red Crescent. The newspapers too have been carrying COVID-19 articles as major headline on front pages. Almost all bloggers in the region have reported about corona at least once.

All these measures are good but there are increasing calls for a stronger fight to be put up, that of completely shutting down the economy. The government and many citizens seem to still be undermining the virus just as was the case in Italy and before the country could be completely shut down, the consequences were already enormous as thousands died, including doctors. Some are still dying. This is what Cameroon must avoid.