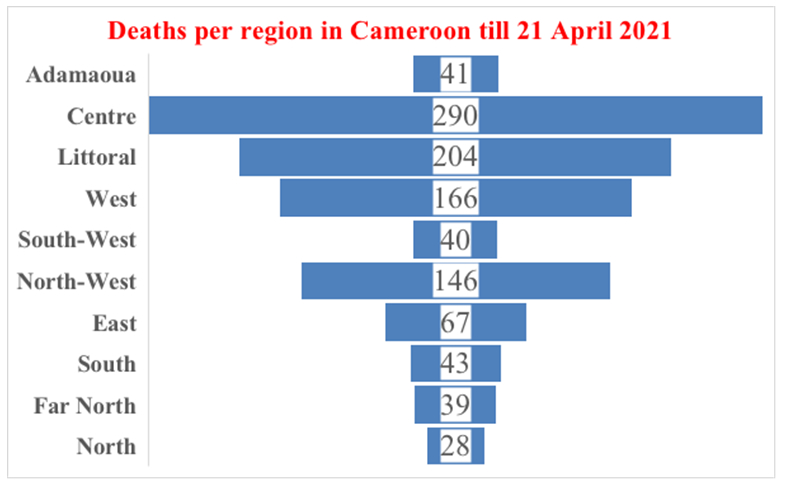 In the economic capital, a team from Data Cameroon infiltrated the circuit of obtaining Covid-19 tests for international travellers. For three months, about forty travellers in search of Covid-19 negative results to leave the country were followed from the sampling point to the airport, passing through analysis centres.

Early in the morning of this day of March, many people are getting impatient at the Covid-19 diagnostic and control Centre in Deido in the 1st district, one of the nine sampling points set up for international travelers in Douala, the economic capital of Cameroon. This Monday, some came for a test and others are there to get their results. For the latter, most flights are scheduled for the same day. “I’m taking the plane in two hours,” worries Lydie*, who is going to France. “You said you were going to send us the tests on Sunday evening. Nothing has been done” she adds. A doctor advised her to go to Laquintinie Hospital, one of the analysis centres in charge of sending the test results to the various sampling points.

At the secretariat, Lydie’s result is still not available. She was redirected to the Douala International Airport, where luggage check-in was underway. But without a negative test, it is impossible for the 50-year-old to follow the process. “Go back to the centre where you were sampled. You need a document,” advises an Ethiopian Airlines ground officer. Back at the Deido centre, Lydie is once again sent back to Laquintinie.  There, an official who had seen her coming and going gave her his telephone number. A few minutes later, after a fruitful discussion via WhatsApp, she can finally queue up at the airport. “I paid and got a negative result test,” she smiles, without revealing the amount.

Like Lydie, many travellers wishing to leave Cameroon encounter many difficulties in obtaining their test.  “It must be said that this is an area (tests for travellers) where counterfeiting is trying to establish itself in a worrying way,” laments Dr. Biakolo Essomba, Director of the District Hospital of the Cité des Palmiers.

Faced with this situation, Dr Albert Mambo Maka, Regional Delegate of Public Health for the Littoral, has set up an online platform where travellers register 72 hours before their flight. A number is sent to them indicating their screening Centre. The test result must then be available before the trip. “The objective sought by the delegate is to thwart the promoters of counterfeiting,” says Dr Biakolo Essomba. In the field, the reality is quite different.

Between February and May 2021, Data Cameroon met or contacted 68 people: travellers, health personnel, security agents at the Douala airport, baggage handlers, airline officials… 57 were aware of the existence of or involved in providing false tests. At least 20 travellers interviewed told us that they had obtained false negative tests, which allowed them to travel outside Cameroon.

For example, a member of our team infiltrated the Covid-19 Diagnostic and Control Centre in Logbaba, in the 3rd district of Douala, on Friday, 23 April 2021, after checking in on the platform for an Air France flight. For a sum of 20,000 CFA francs, he obtained a negative test without being sampled.

An official at the Ministry of Public Health who wished to remain anonymous acknowledges with fear these “pockets of corruption”: “There are several networks of embezzlement. In Laquintinie, for example, upon arrival, some people show you a document with a number on it that says “positive”. They make you believe that it is your result. You then have to pay them to change it to a negative.

In the field, we found several other methods of corruption. At the Douala International Airport, the network ranges from baggage handlers, to security agents (police, military in civilian clothes) to agency managers. “Give me 50,000 CFA francs each, and you will have a negative test in 30 minutes,” an airline official sitting behind his office in the airport offered two members of our team. At the diagnostic centres in Bangue, Deido and New-Bell, some health workers offer travellers negative results for large sums of money, sometimes more than 100,000 CFA francs. The process is simple: once on the premises, they give you their telephone number for negotiations.

In some cases, travellers whose flights have been scheduled in a hurry are forced to obtain a negative test quickly. After having been shuffled around to four sampling points without succeeding in getting a sample, Eric* and his colleagues finally went through a “network” via which they obtained the number of a doctor on duty at the Laquintinie hospital who provided them with negative tests. “We didn’t pay anything at the cash desk, but rather at the secretary of this doctor who took 15,000 CFA francs each and promised to come back the next day to get the result…”, he says.

Even those who followed the normal procedure were not spared. Registered on March 20, 2020, on the platform, taken 24 hours later as required by the regulatory procedure, one of the reporters of Data Cameroon never got his result. As a result, he missed his flight on 22 March.

On that day, while we were still at the closed check-in counter, a young woman, introducing herself as “a civilian soldier” within the airport, approached us. “If you want to take the next flight, I can help you. You pay me, and I will provide you with a negative test, signed by a doctor, in a timely manner”. If not, she assured us, the only ‘other’ option was to negotiate with the airport health officials: There are three checks. At each stage, you have to pay 30,000, 50,000 or even 80,000. In the end, some pay more than 180,000 CFA francs to take the test here. Many needy travellers seize the opportunity.

More seriously, some of those tested positive for the coronavirus do not hesitate to resort to these corruption ‘networks’ to get false negative results. “It is extremely serious that a traveller … who has been tested positive, buys a negative test. He contaminates his seat neighbours, the stewardesses and even the pilot. And once in the host country, if nothing is done, he contaminates those at the airport, his relatives…”, deplores the executive at the Ministry of Public Health who specifies that “some health personnel have been sanctioned” for these actions. Despite our insistence, he did not give us any names. We were therefore unable to verify this information.

Questioned on April 30, 2021, during the launch of the regional campaign of vaccination against the coronavirus in the Littoral region, Dr. Albert Mambo Maka, regional delegate of Health assures that the platform put in place was initially ‘misused’ by his collaborators on the field. “This money decreases as we use it,” swears Mr. Maka. Yet registering on the platform does not necessarily prevent fake tests. “The main thing is to register (online) to have a trace. Once it’s done, I provide you with the negative test,” says a health worker in New-Bell. Two others made the same suggestion at the Bangue sampling centre: “We have our contacts right down to the laboratory workers who do the tests”.

According to various people interviewed, false tests are also flourishing because of the regular shortage of inputs at the sampling points (kits needed for the collection of volunteers for the Covid test). At least 10 travellers say they have not been able to do their tests in some centres because of this shortage. “Today we have difficulties in terms of input supply, but we must remain calm and reassured. There is a problem of distribution from Yaoundé to Douala, and once at the delegation, we have to dispatch it to the field,” says Dr. Etoa, head of the New-Bell health district.  During this survey, our efforts to obtain data on PCR testing in the Littoral were vain.

*Some names have been changed to preserve anonymity.