Environment: In Bonabéri, about 31% of mangroves have been lost in 5 years 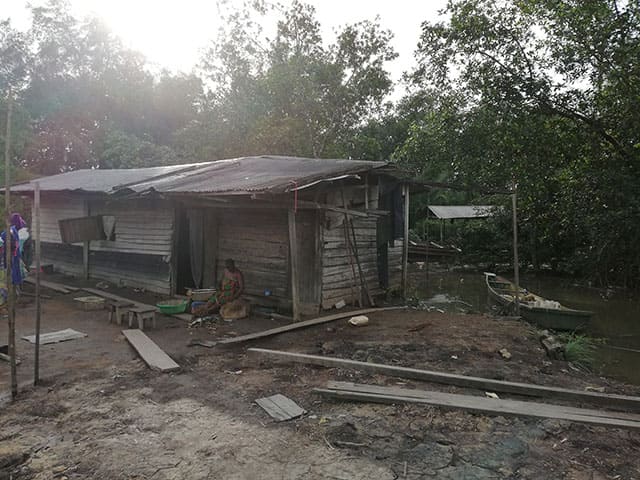 Environment: In Bonabéri, about 31% of mangroves have been lost in 5 years

With a loss of 6.2% per year, that is, 31% for the past 5 years, the Douala-Bonabéri mangrove is the most destroyed in the Wouri Estuary. The socio-economic crisis in the North-West and South-West regions, population’s carelessness and State projects are partly the cause of these losses in Douala IV subdivision Environment of mangroves.

Hammering sounds. Over the timber roof tuss, two men are building a house made of temporary materials. We are at « West End », Bamenda beach in Mabanda-Bonabéri, in Douala IV subdivision. Over here, the mangroves along the Wouri River are gradually being destroyed by buildings that are springing up.

A path made of dried mud leads to Lucy Agbor’s home. Large trees with airy roots hang over the roof. The makeshift house is crumbling due to its age and harsh weather. The yard is muddy. You have to step on it with care. The ground sinks as you walk.

This afternoon, Lucy is sitting in front her house, setting the net for a fishing trip, her main task. She patiently waits for the high tide which, according to the inhabitants of this area, is approaching. Stanley Imjbo, a Nigerian citizen, explained « At around 7: 00 p.m., it won’t be possible to move around here anymore. It will be high tide. We will be overwhelmed by water, which will also flood our houses and will only flow back in at around 8: 00 am tomorrow. He has been living there for 30 years.

The roots of the trees, which have so far escaped being cut down, form a natural barrier that protects his house from the wrath of the waves. 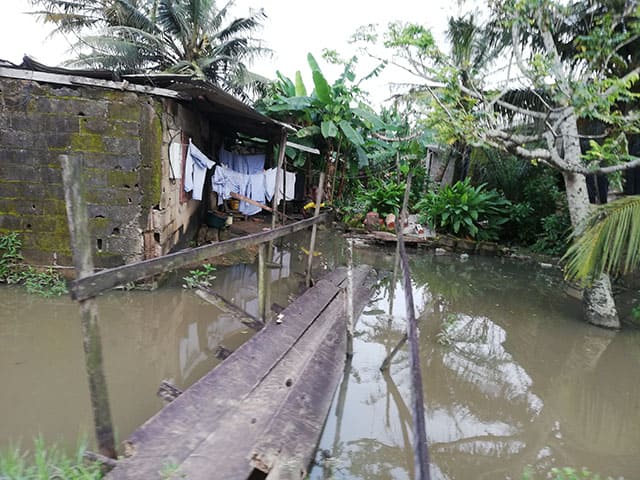 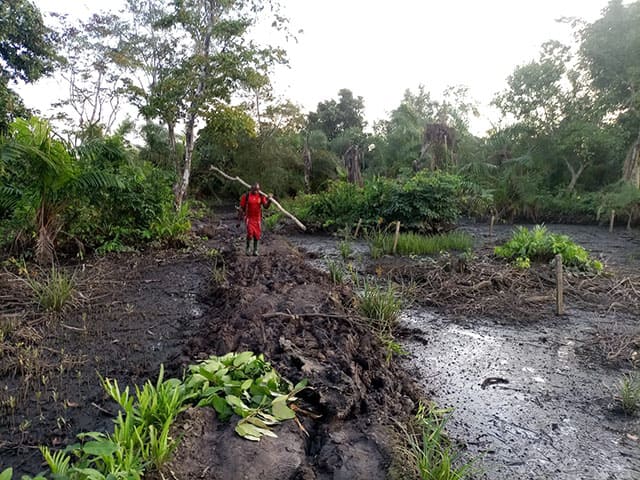 Stanley’s plot of land is 20x15m, a piece of land he bought in 1995 from a Douala native for 300,000 CFA francs. To settle there, Stanley has chopped down trees and filled in the land.

Augustin Issa, Lucy Agbor’s husband, followed suit when he settled there about 30 years ago. He recalled « It was mangrove all over. There was only water and forest« . He added that at that time, only two people were living there. Augustin, whose plot of land is three times bigger than Stanley’s, said he bought it from a Douala native for 500,000 CFA francs.

These human actions are in contradiction with law No. 94/01 of 20 January 1994 on the Regime of Forests, Fauna and Fishing, which describes mangroves as a fragile ecological zone that must be protected, and « whose exploitation remains prohibited”.

According to an article in Forest news of July 2020, the mangrove area around Douala called the Wouri estuary is the most depleted. It shows a destruction rate of about 6.2% per year in the Douala-Bonaberi area, that is 31% over the past 5 years. At the national level, the same source points out, Cameroon records a loss estimated at 1% per year. In 2018, MINEPDED disclosed in the document entitled « National Strategy on Sustainable Management of Mangroves and other Coastal Ecosystems in Cameroon » the country has lost almost half of the mangrove area in 30 years. The United Nations Environment Programme (UNEP), in its 2007 report, warned that nearly 70,000 hectares of Cameroon’s mangrove forests had been drastically depleted between 1980 and 2006.

As in West End, the inhabitants of Bonabomè, another neighbourhood in Douala IV subdivision, are in the same or worse living condition. Here, piles of dried mud are used both as roads and as building materials for the houses’ foundations.

Deep holes are noticeable at every step. Rafiatou Mfoye, an internally displaced person from Ndop in the North West, explained « Two children died here a few days ago. It was during the high tide. »

As in West End, the Bonabomè neighbourhood is mostly inhabited by internally displaced persons (IDPs) due to the proximity of the South-West region to the Bonabéri neighbourhood. In the UNHCR report of September 30, 2022, Cameroon estimated the number of IDPs at 975,786. About 81,298 are registered in the Littoral region originating from the South-West.

At the Town Hall, the exact number of IDPs in these areas is unclear. In one of its activities, the NGO Lodge an Idp issued a report on the multi-sectoral assessment of the needs of vulnerable IDPs in Bonaberi. Out of the 29 neighbourhoods selected, the association identified 1,932 vulnerable IDPs. Mabanda holds the top spot with a total of 367 vulnerable IDPs.

To demarcate the building sites in Mabanda, a delegation made up of the Divisional Officer, the Sub-Divisional Officer, the Head of Quarter of Mabanda and other officials decided to erect markers in 2008. H.M. Ngolle Théophile, the Head of Quarter of Block 28, said that the population was forbidden to settle beyond the boundaries. He said, « They were cement markers of about one meter height. They extended from Mabanda High School to ALPICAM. And even up to 39, at Ecole Communale.”

A reforestation project was also mentioned during the visit. But so far, nothing has been done. Houses are springing up in these areas, which are forbidden for habitation in this neighbourhood, which covers about 500 hectares and is subdivided into 39 blocks. In a publication of Douala Today.com, Joseph Tufoin, Quarter Head of the Mabanda, estimated its population at 132,000 inhabitants in 2013. He pointed out that the population is increasing by 5% every three months.

At the Douala IV Sub-Divisional Office, no document on the 2008 mission and the reforestation project is available. Michel Welland, the Private Secretary

From 2009 to 2022, Joseph Kiari sent a dozen letters to the administrative authorities. These letters were the source of several reactions from the authorities and prompted the Divisional Officer of Wouri to sign a decree in July 2010, creating a commission in charge of restoring and securing the mangrove in Mabanda. Article 2 of the said decree states that « the work of the commission (….) ends with the submission of the report noting the ultimate disposal of the mangrove’s degradation risks ».

In 2009, the first mission of the environmental inspection brigade of the Ministry of the Environment, Nature Protection and Sustainable Development (MINEPDED) for the Littoral noted the destruction of the mangrove on a strip of land nearly 600 metres wide and more than 1,500 metres long on the banks of the Wouri River at Block 27.

The two Environmental Inspectors, Dieudonné Mbogning and Paul Nanfack, who authored the report of the mission on the site, drew some conclusions and made some recommendations: the people living on this site should be evacuated. Those guilty of acts of degradation should be summoned and questioned. A restoration plan for the degraded areas should be considered. « These measures could also concern blocks 17, 18, 23, 24, 28 and 30, » states the document in our possession.

Similar observations were made in 2012 by another ad hoc committee, which noted that the population had damaged the boundary markers that had been installed. The report stated that the Divisional Officer recalled to the illegal mangrove land sellers that riverine domain cannot be sold.

A decade later, nothing has changed in Mabanda. No reforestation project has taken shape. Illegal land sales and anarchic constructions still flourish. The Head of Block 27 continues to advocate, to no avail. He has been summoned by one of the illegal land sellers in the mangrove.

However, NGOs are working for the reforestation of mangroves in Douala IV subdivision. This is the case of the Watershed Task Group (WTG). Nina Lebogo, Head of Energy Projects currently supporting reforestation projects at WTG said  » We have started a reforestation project in the Douala IV area, specifically in the villages of Bonamikano and Djebale. We also plan to reforest the Ngondo site. »  This project, still at its test phase, will cover all areas where mangroves are destroyed in Douala Environment of mangroves.

William Lemnyuy, MINEPDED Departmental Delegate, points out that plans to restore mangrove and raise awareness among the population have been launched. « We have started with Bois des singes. We will definitely move on to Bonaberi. The plan is not to evict them, but to give everyone a plant to plant ». The Regional Delegation of Forestry and Fauna has the same initiative, pointing out that « the State has put in place a number of projects that focus on awareness, community and private forestry, » confided Georges Amougou, the Regional Delegate.

The population of Bonabéri is not the sole interested in the mangrove areas. In a notice   issued on 28 March 2022, the Ministry of State Property, Surveys and Land Tenure (MINDCAF) declared the development of port activities at Mabanda, Alpicam and surrounding of Douala IV to be in a public interest, covering an area of 96 ha 92a and 64ca.

The inspection report on the destruction site of mangrove in Block 27 in our possession, published in September 2009, describes the area of interest in Mabanda-Bonabéri. It is divided into two declarations of public utility (Dup) close to the Wouri River for the development of the port in this area. It is a Dup of 120 hectares and another Dup of 22 hectares in ALPICAM and its surroundings.

On May 23, 2022, an article published on the Mongabay.com website focuses on the Douala Port expansion that endangers the mangrove. It points out this ongoing project, which runs from 2020 to 2050, will have an impact on the entire Wouri estuary, as is the case with the industries in the area. Michelle Mongue, Head of the Hygiene and Sanitation Department at the Douala 4 town hall, confided

« These industries impede recovery, reduce the protective zone that the mangrove plays, air polluted (…) We are in an economic production zone, with 3 cement factories built in one spot. People’s health is really threatened« .

She added that this industrial zone does not have a water purification station. A lack that she attributes to the Delegation of MINEPDED. The Delegation also raised the issue of sustainable development, which includes economic development as one of its axes.  » There are 3 components to sustainable development. The environmental, social and economic components. We have to make sure that there is a balance between these three components, » emphasised William Lemnyuy.

Dr. Ernest Kotte Mapoko, a lecturer and researcher at the Institute of Fisheries Sciences of the University of Douala at Yabassi, specialised in Ecology and Biodiversity of aquatic environments, explains that these compensations may include planting of grass with decorative or fruit trees to have the same function as that of the forest. But  » If the impact of mangrove destruction can be avoided, let’s do it. If not, we try to mitigate the impact of mangrove destruction. But if we can neither avoid nor mitigate it Environment of mangroves, we have to compensate, » he concluded.

This investigative journalism study was conducted in collaboration with the daily newspaper Le Jour and DataCameroon, as part of the Open Data for Environment and Civic Awareness in Cameroon (ODECA) project, put into place by ADISI-CAMEROUN. It is funded by the Centre for Investigative Journalism (CIJ) of the University of London as part of its Open Climate for Reporting Initiative (OCRI).

Partager la publication "Environment: In Bonabéri, about 31% of mangroves have been lost in 5 years"