[Fact-Checking]:Thousands Scramble for Aid after Minister said there’s no Humanitarian Crisis in Cameroon 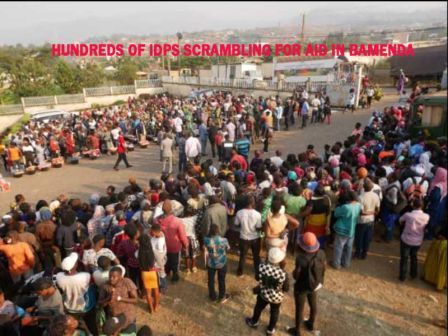 The national coordinator of the Emergency Humanitarian Assistance Plan, Minister Paul Atanga Nji has ironically denied the existence of a humanitarian crisis in Cameroon meanwhile documented facts and figures from aid agencies and NGOs affirm.

« No, there is no humanitarian crisis in Cameroon, the situation is under control and it is well managed » These were the words of Cameroon’s Minister of Territorial Administration (MINAT), Paul Atanga Nji during a press statement he made on the Humanitarian Situation in the North West and South West Regions on Saturday December 28 2019 in Yaounde. He made this declaration at a ceremony to dispatch a special Christmas and New Year gift of 100 trucks of humanitarian aid (food stuffs, sanitary kits and beddings) from the presidential couple to internally displaced and affected persons in the two English speaking regions of Cameroon.

The minister made the contradictory statement in order to refute allegations of an ongoing serious humanitarian crisis in the two concerned regions. According to minister Paul Atanga Nji, « For some time now, some ill-intentioned political actors and Non-Governmental Organisations manipulated by government detractors and some partners animated by bad faith have been struggling to push through unfounded information to the international community that the situation in the North West and South West Regions has led to a humanitarian crisis in Cameroon. »

A data analysis of the minister’s press statement shows contradictory figures in the balance sheet he presented as regards the Humanitarian Assistance Plan so far executed by the state. At first, Paul Atanga Nji said « I wish to make it abundantly clear here that Cameroon to date has only 152.000 Internally Displaced Persons in the North West and South West Regions and approximately 6 to 9.000 in the other regions »

Still in the course of granting the press statement, he later said government has assisted over 160.000 IDPs in the two regions and more than 10.000 in the other regions. These figures are contradictory. It should be noted that from the on set, Paul Atanga Nji denied the existence of an Anglophone problem.

The New Humanitarian, an independent nonprofit news organisation specialised in global  humanitarian crises reporting, in its latest ranking of humanitarian crises in the world through a publication titled Central Africa: Benighted Neglect has written that « Apart from regional proximity, what connects Burundi, Cameroon, and the Central African Republic is the extent of the international neglect of their deteriorating crises. Violence, displacement, and hunger stalk all three central African countries, yet they get far less media attention and humanitarian funds than many other emergencies. »

The United Nation’s Office for the Coordination of  Humanitarian Affairs (OCHA) Cameroon in its 11th Report on the Crisis Situation in the NW/SW Regions of Cameroon, published on Nov. 4th 2019 on https://reliefweb.int presented statistics of the situation on the ground according to which 1.3M people are in need, 820K targeted for assistance, 530K internally displaced, 376K members of host communities in need, 330K other people in need, 315K people in extreme food insecurity.

These are statics the territorial administration minister refuted and referred to them as big lies. In reaction, OCHA on December 30th 2019 tweeted that « Again, these figures are not fakenews. The humanitarian situation in Cameroon needs more attention in 2020. Hundreds of thousands of people remain in serious need of assistance. »

Strategic Humanitarian Services, SHUMAS Cameroon, a Bamenda based Non-Governmental Organisation on December 28 2019 at an  Experience Sharing Meeting on World Food Program (WFP) Activities in Donga Mantung and Bui Divisions that took place in its office expressed fears of a food crisis in some parts of the region. The organisation’s Director General said they’ve intervened in the distribution of WFP food assistance consisting of rice, beans, vegetable oil and salt to some 45.000 beneficiaries who were mostly people with special needs, pregnant and lactating women, internally displaced persons, returnees, the elderly and their vulnerable hosts.

As revealed by a participant at the meeting, within 2018/2019, almost 80% of farm land in Bui Division was not cultivated due to road blocks, gun battles and other hurdles. Tumi Humphrey Vernyuy from Kitiwum in Kumbo said the crisis has left very difficult moments on him as he lost his job. In his words, « The situation has made it unbearable that most families are finding it difficult to have simple palm oil, grind their corn etc. »Korshi Delphine from Nkambe on her part said the crisis has brought about poverty and poor nutrition on her family as she now hosts four IDPs and the quantity of food prepared at home has dropped.

The distribution of the special new year gift from the Head of State and wife has been taking place within several areas in the two affected regions and the the story has been same everywhere, thousands of potential beneficiaries have been scrambling to at least have something. Therefore, the humanitarian situation in the two regions needs more attention as there are thousands of people in need that haven’t been reached to.

While collecting the little available aid, not only have beneficiaries been requesting for an end to the crisis. As a way forward, Pastor Abanda Edwin, host of 5 IDPs in Mbengwi says the president should announce a cease fire, release all Anglophone detainees that were arrested in connection with the crisis and seat on a genuine dialogue table with the separatists. By so doing, they’ll be able to regain their normal life, reengage in their previous daily activities and fend for themselves rather than depending on little aid that’s hardly sufficient.