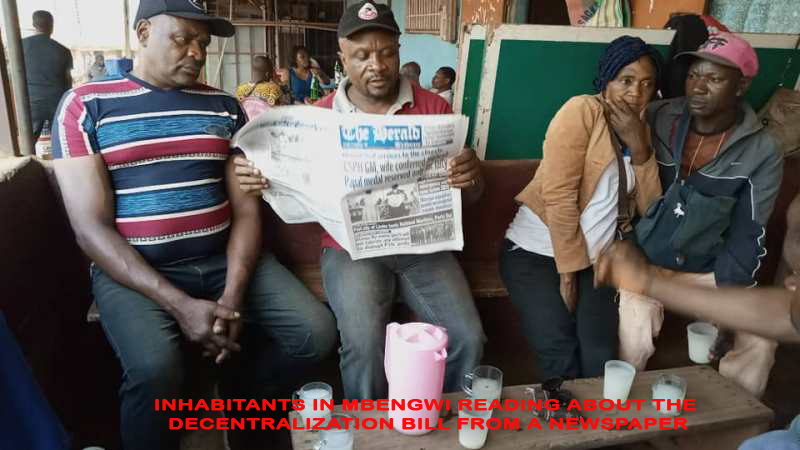 Anglophone Crisis Rejected The enacting of the decentralization bill in Cameroon’s two houses of assembly has set tongues wagging in the North West and South Regions, today commonly referred to as Ground Zero.

It’s a dry season. The air is clouded with dust as inhabitants go about their daily hustle. On the broken roads, cars and bikes keep hooting and horning as they hunt for passage space with pedestrians. Business stalls in the markets are open but the owner’s seat in front tirelessly hoping at least a customer comes to Anglophone Crisis Rejected buy. Many old fathers are battling with flies in palm wine bars where hygiene is no one’s concern. As they eat kola nuts and sip the white liquor, the topic of discussion is uniform, the Anglophone crisis. This is the daily atmosphere in Mbengwi, headquarters of Momo Division in the North West Region of Cameroon Anglophone Crisis Rejected on an ordinary day void of gunshots or ghost town.

On the 18th of December 2019, Cameroon’s Parliament during an extraordinary assembly adopted a bill to Institute the General Code of Regional and Local Authorities. It was hoped that this will go a long way to solve the ongoing Anglophone crisis as a resolution from the early October 2019 Major National Dialogue that was convened at the behest of the Head of State, President Paul Biya in Yaounde to address the crisis.

Unfortunately, public opinion sampled in Mbengwi in particular and the North West Region in general shows that a majority of persons find the said bill short of expectations and Anglophone Crisis Rejected have thus rejected it on the basis that it doesn’t in anyway address the demands of the people. Journalists, religious authorities, political and civil society leaders alike together with legal minds and the man on the street have all been commenting on the decentralization bill.

Mr. Nyudze David, an inhabitant in Mbengwi, says the bill on decentralization is a total failure to solve the Anglophone crisis because the people’s proble isn’t decentralization but their complete independent identity. To him, even if some reforms are made, it doesn’t wipe out the fear of government mafia to always sell the goat and hold the rope especially as paper decisions are hardly practical realities in Cameroon.

Honourable Edna Enih Mbah is Member of Parliament for Momo East Constituency, Mbengwi. To her, it’s a bill that has a different meaning from the expectations of many Cameroonians. She says the strong arm of the administration will still be felt because regional and local councils won’t carry out any deliberations or have any seating without the representation of the state to monitor which is simply the former situation carried forward in Anglophone Crisis Rejected another way. « This bill will not solve the Anglophone Crisis because the major problem is the fact that the people feel they are not recognised, they’re unable to exercise what goes with their cultural identity, their linguistic background and even their understanding of institutional functions. Unless there’s a constitutional review to reinstate the two systems, nothing will change. » said the M.P

Gwain Colbert is a journalist in Bamenda. To him, it should be considered as a first little step to give these regions the much-needed autonomy though in its present state, the Anglophone Crisis Rejected special status raises more questions than provides answers as most of the provisions still need texts of application.  In as much as the special status does not seem to appeal to fighters in the bushes and Anglophone activists abroad means that the conflict would continue to escalate. As a way forward, Colbert proposed that a rereading and rewriting of the bill to reflect either the Hong Kong or the Quebec situations would do the trick.

Nyamkah Rubby Tangyi, a recently graduated Anglophone Crisis Rejected paralegal from the Law Department in the University of Bamenda expressed disappointment because to him, structures are created and at the same time incapacitated. With reference to Section 326(2) and (3), part 5 of the said bill, he finds loopholes. « Saying the two concerned regions « may be consulted » already depicts the powerless nature of the created structures because decisions could still be taken without their consent », Rubby added. « The government knows best what the people want and it will serve the nation good if these demands are sincerely responded to », he ended.

Same day the bill was passed i parliament, the Social Democratic Front (S.D.F) party rubbished the special statues emphasising that it’ll do nothing to end the separatist movement because Anglophone Crisis Rejected the Anglophones on 11 February 1961 freely took a decision to attain their independence by joining the already independent Republic of Cameroun, bringing along with them a set of core values such as Anglo Saxon education system, common law legal system, a strong economy just to name these few but all have gradually and systematically been  deformed, adulterated, polluted, dismantled and erased through discrimination, marginalization, domination, subjugation and assimilation by the majority French Speaking government.

While the S.D.F saw nothing good in the bill, speaking on behalf of  the ruling Cameroon People’s Democratic Movement (C.P.D.M) parliamentary group, Honourable Datouo Théodore Anglophone Crisis Rejected rather congratulated the Head of State for tabling the bill at the present moment in the history of Cameroon and said the extraordinary session showed the importance of the bill, reason why all should vote it, this according to www.cameroun-tribune.cm

With these negative reactions, there is need for parliament to revisit the bill so as to meet the aspirations of many Anglophone Cameroonians. By so doing, hope will once more be rekindled in the suffering population that’s been yearning for an end to the crisis and a complete return to normalcy without which the Anglophone Crisis Rejected government may just rightly be putting the cart before the horse as many opined. The best time to do so is now.