Timber exports: More than 173 billion CFA not declared by Cameroon 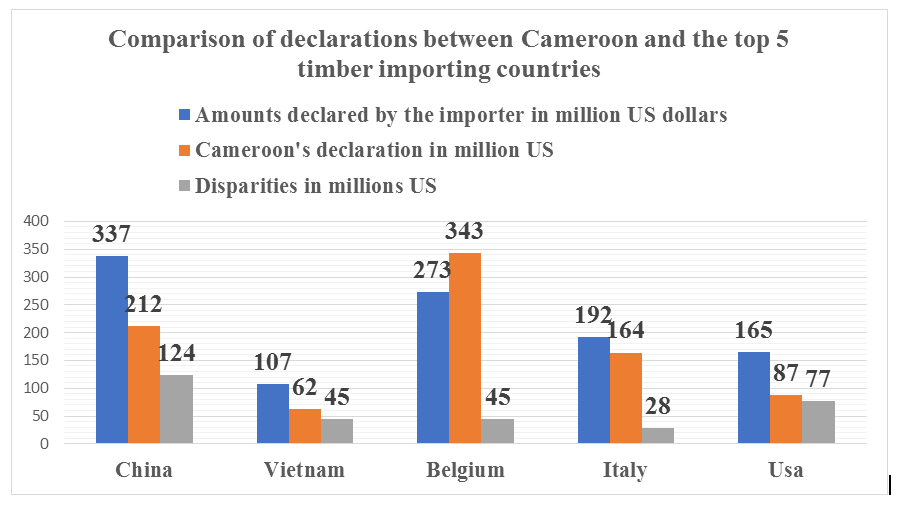 This is the amount not submitted by Cameroonian officials to Comtrade from 2013 to 2016 in connection with the export of timber from Cameroon to Italy, USA, Vietnam, China and Belgium. However, the currencies revealed by the latter are sometimes double those of Cameroon. Meanwhile, Cameroonian services have not declared anything from 2017 to 2020. When questioned, there was a blackout in Yaoundé.

Cameroon has an immense forest that is regularly the object of all kinds of covetousness. However, this vegetation cover, which is among the most important in the Congo Basin, the second largest tropical forest in the world after the Amazon, hides immense trafficking of all kinds, ranging from corruption to illegal logging and massive embezzlement of currency linked to the commercialization of wood. In the latter case, data collected in Comtrade, a United Nations database oriented towards official international trade, shows strong currency disparities on timber imported from Cameroon by some Asian and Western countries.

In particular, it can be seen that between 2016 and 2020, the top five importing countries for goods classified under HS code 4407 (Wood sawn or chipped lengthwise, sliced or peeled, whether or not planed, sanded or end-jointed, of a thickness exceeding 6 mm) are China, Vietnam, Belgium, Italy and the USA.

More than a month after sending an access to information request, all the public administrations concerned, notably Customs, the Ministry of Finance and the Ministry of Forests, involved in timber and foreign trade issues, have not deigned to respond. Of the embassies involved, only the US embassy in Yaoundé has responded. The data made available for comparison comes from the US Census Bureau, which collects all the international trade figures of Uncle Sam’s country. The data are not different from those of Comtrade.

This is not the first time that the media in the sub-region have seriously investigated the subject. In January 2021, the online news site Info-Congo, which specializes in environmental journalism, noted that ’32 billion CFA francs of false invoicing in the illegal timber trade between Cameroon and Vietnam’. The article points to a ‘low contribution of the forestry sector to budgetary revenues’ which is explained by ‘corruption, illegal timber trade, illegal felling and false invoicing in the sector.

More seriously, in a report published in November 2020 by the Centre for Environment and Development (CED) and its partner, the Environmental Investigation Agency (EIA), the trade with Vietnam is highly illustrative in this regard, with the vast illicit forestry traffic in Cameroon at stake. « Official records reveal that this trade is massively under-reported on the Cameroonian side, » the report reveals. Indeed, ‘there is a significant gap between the value of timber products that Cameroon declares as exported to Vietnam, and that which Vietnam declares as imported from Cameroon. This discrepancy is particularly striking for the log trade. Between January 2009 and December 2017, the total gap amounted to US$420 million (US$356 million for logs and US$63 million for processed products). Not only has the value of the gap increased almost every year, but the proportion of the value has also been misreported (from 36% in 2009 to 54% in 2017, with an annual average of 41%). »

By analyzing the data collected from various sources, it appears that the practice is widespread, with several countries importing timber into Cameroon regardless of the form of timber. While this may explain the sometimes very significant disparities, the fact remains that the fight against this phenomenon, which remains very political and institutional, is slow to bear fruit. It is in this context that economists have identified four mechanisms by which bilateral disparities in trade values can occur. These are ‘over-invoicing of exports, under-invoicing of imports, under-invoicing of exports and over-invoicing of imports’. According to Léonce Ndikumana, Professor in the Department of Economics at the University of Massachusetts Amherst and Director of the African Development Policy Program Political Economy Research Institute (PERI), « disparities are due to deliberate misinvoicing, but they can also result from inconsistent classification of products across partners and over time, inconsistencies in the recording of the origin and destination of products, or transit trade, which can result in the recording of a different country of destination than the actual country to which the goods are shipped.