Environment:  Challenges of sustainable management of mangroves in Douala

Environment:  Challenges of sustainable management of mangroves in Douala

Public and private measures are being implemented to prevent the loss and improper exploitation of mangroves. Yet, most projects, besides lacking financial resources and traceability, are not commensurate with the challenges of the city.

On the banks of River Wouri, more than 3 km from the new bridge, the islets are disappearing at a glance. Chi Napoléon, National Coordinator of the Watershed Task Group (WTG), a Non-Governmental Organisation (NGO) that advocates for environmental protection in Cameroon, feared that  » you will soon hear that water has flooded its riverbed. If this island disappears, it will be dangerous for Bonamikano, Bonamatoumbe and Djebalè villages and the floods will be disastrous. »

Chi Napoleon, a wetlands specialist, warns about the cleared areas around the islets. At Bonabéri, on the banks of River Wouri in Douala IV subdivision, mangroves and islets are gradually disappearing. In certain places, trees are cut down and hidden in the bush.  He laments while observing the site, « the deforesters are moving into areas that were previously untouched. »

From 2000 to 2015, according to Cameroon Mangroves Atlas, mangrove land and associated coastal forests in the Cameroon estuary (the Wouri estuary) dropped  by -14.3%, from 106,325 ha to 99,730 ha, that is, 1% per year. The mangrove area around Douala is the most depleted, with a 6.2% annual destruction rate in the Douala-Bonabéri area. Edouard Yagouda, the Regional Delegate of Environment, Nature Protection and Sustainable Development (Minepded) for the Littoral warns that,  » Douala will one day find itself in water, because the natural barrier that protects it from flooding will have disappeared « . 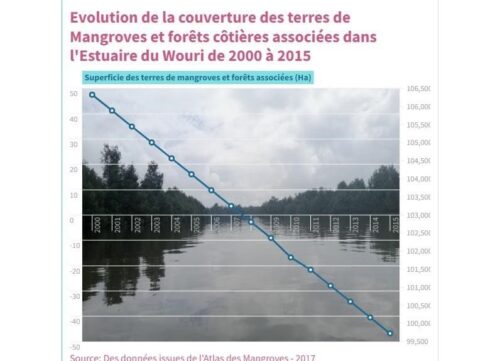 According to the International Observatory of Mayors , the swallowing up of the economic capital with about 3 million inhabitants is not the only expected outcome. Its biodiversity is also at risk. Dr Joseph Olinga, Deputy Director of Studies and Environmental Protection at the Douala Urban Community (CUD) explained that,

« This biodiversity is both aquatic and terrestrial. The mangroves are breeding grounds for several fish species. »

Several studies have described the risks on the Wouri mangroves. In the report published in 2018, Les mangroves du Cameroun, Etats de Lieux et gestions  . MINEPDED identified among other threats: population growth, urban development, agro industrial plantations, water hyacinth invasive species, energy wood, oil exploration/exploitation, waste, pollution, overfishing. In 2015, according to the Atlas on mangrove land use, 14,730 ha of mangrove land in the Douala-Bonaberi area was occupied by housing, while mangroves that were severely damaged covered an area of 10,703 ha, compared to 4,100 ha for untouched mangroves. To limit the threats, actions are carried out both by public authorities and NGOs with the support of international partners… 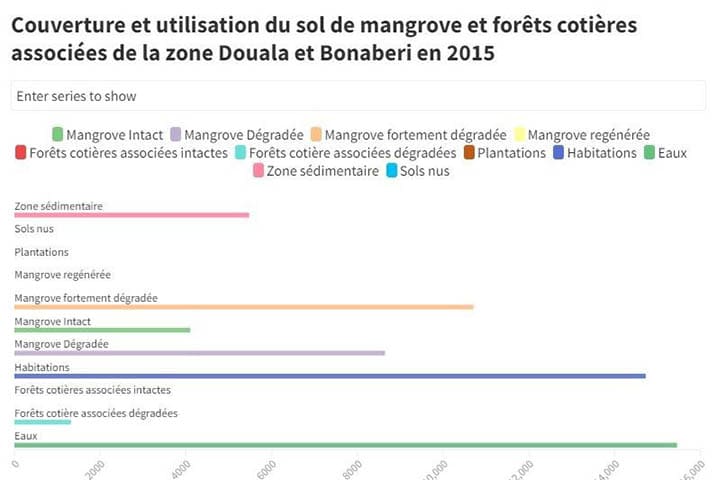 According to the NGO WTG, timber trafficking in the mangroves is reducing the « Rhizophora and Avicennia« , two of the most valued mangrove species in the Littoral region. The coastal populations commonly call them Matanda. Their exploitation has increased tenfold in recent years, according to Mr. Lobe, a 60–year-old native of Bonamatoumbe in Canton Belè Belè says that, « because of urbanisation, Matanda is being attacked. Mbelé and Djebalè are spared for the moment because they are islands. Loggers do not yet have the means to access them. Otherwise, they would have already destroyed Matanda like the banks of Bonambapè. »

For this resident, it is up to the authorities to find solutions to stop the mangrove cutting. « The town hall, the sub-divisional office … are there to help curb this haemorrhage, because at the level of the chieftaincies, we do not have strength anymore. It is through some actions of the sub-divisional office, that Matanda cutting was banned, » informed the representative of the Canton Belè Bèlè Chief.

The Chief of Block 7, Youpwe in the Douala II subdivision, issued a radio communiqué on 12 June 2019, prohibiting the population of Youpwe and Bois de Singe from « any activity aiming at destroying the mangrove ». However, no enforceable measure has been taken, yet in these areas, the sound of power saws is part of inhabitants daily life. His Majesty Victor Bete said, «at our level, we don’t have the means to fight against this traffic. The traffickers cut during the day and usually transport at night. » 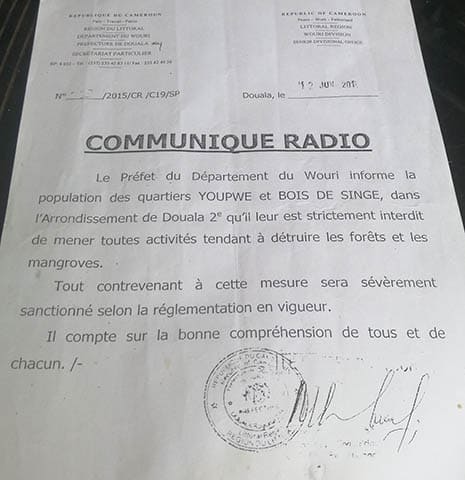 Dozens of canoes loaded with logs of this resource land every day under the black bridge at Village quarter in Douala III subdivision and at Bois de Singe where authorities often carry out crackdowns. The Departmental Delegate of MINEPDED explained that, « these woods gathered in the yard, have been seized. Crackdowns continue but, like all other actions, even though we have been trying to fight against robbers, there are always some. At least they know that their heads are hanging in the balance.”

In addition to the crackdown, there are also awareness-raising activities. Bridget, a 55-year-old fish smoker, believed that, « for years we have been told not to cut matanda. When you cut it down, the forest is weakened, winds are more violent, and we are in danger« . Despite the impact, Marceline Dohko, her colleague, finds it difficult to abandon the use of matanda in their business, which is « the only way they can send their children to school« .

In 2021, however, they were provided with improved smoking rooms by a South African team that offers alternative solutions based on solar energy. This device has the advantage of reducing the risks related to health problems to which women smokers are exposed. But, according to these women, more funds are needed to expand its use. According to the Cameroon Program on Energy Statistics, « wood is the main source of cooking fuel for about 70% of Cameroon’ households”. In Douala, it is used for cooking, catering, construction and many other activities.

When it comes to the preservation and sustainable management of natural resources, experts recognize that it is difficult to prohibit populations from exploiting the resources they find in their environment. Most interventions do not aim to achieve this. Christel Bou, Forestry Officer founder of the association Action pour la protection des Écosystèmes de Mangroves in 2018 informed that,  » We can never prevent the cutting of mangrove wood. But we need to manage them rationally so that future generations can benefit from them, as we are doing now. »

Christel’s work began in her native village of Yoyo, where she conducts surveys to better understand the lifestyle of the communities that depend on mangrove resources and also why some of the projects that have been implemented do not yield results. He advised that, « we need to show those who cut wood that it is not the only source of income. We have to offer them alternatives. »

In the same vein, Dr. Olinga asserted that « the idea is not to claim that the areas should be protected or that mangrove wood should not be touched. Rather, we need to set up strategies that help us to do both. People who make a living from cutting mangrove wood can be reconverted to an activity such as tourist guide, canoe driver, etc. » 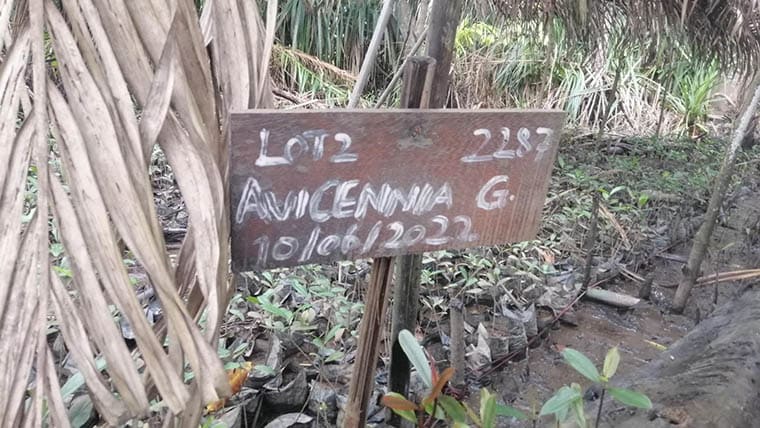 In Douala, several mangrove reforestations projects have been identified. However, it is difficult to find them. Between 2020 and 2022, reforestation projects were rare according to the Regional Delegate MINEPDEP-Littoral. For Boum Christel, this restoration does not follow the speed of cutting « because we cut every day but reforestation is almost non-existent. »

With a view of recovering the loss of mangroves on the banks of River Wouri, a nursery of nearly 70,000 Rhizophera and Avicennia species has been set up by the WTG association in Bonamikano, in Bonaberi. Chi Napoléon explained:   « we will reforest 26 ha. 11 ha in Bonamikano and 15 ha in Djebalè. » The reforestation is one of the components of the project to restore mangrove ecosystems and promote resilience conducted by the international NGO Planète Urgence.

The project is set up with the collaboration of local organisations such as WTG. Over a period of 5 years, the project will help to create an important carbon sink in this depleted ecosystem on the Wouri river banks. But as soon as the nursery was installed, it was threatened. Part of the 11ha requested by WTG is gobbled up by a construction project that has destroyed more than 200 ha of mangrove in Bonamikano and Bonamatoumbe.

In Douala, efforts are underway, such as this one, to preserve mangrove ecosystems from extinction and misuse. However, most of these projects are inconspicuous, lack traceability and do not seem (in terms of numbers, consistency and resources) commensurate with the size of the challenges facing the city. In addition, according to some organisations, the lack of funding and the lack of cohesion between the different stakeholders hinders   results.

A lire aussi :  Environment: In Bonabéri, about 31% of mangroves have been lost in 5 years

This survey was conducted within the framework of the Open Data for Environment and Civic Awareness in Cameroon (ODECA) project, instigated by ADISI-CAMEROUN. The project is funded by the Centre for Investigative Journalism (CIJ) of the University of London, as part of the Open Climate for Reporting Initiative (OCRI)