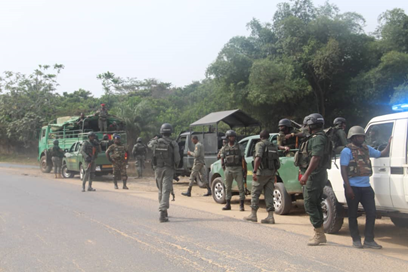 The coupled elections of February 09, took place in the Southwest region under strong military presence. While the elites and high personalities benefited from armored vehicles and military protection, ordinary citizens were left at the mercy of the separatists.

Cameroon on February 9, 2020 organised local elections to elect representatives to the National Assembly and council executives across the territory. The double polls took place within the context of growing insecurity in the troubled North West and South West Regions following an armed conflict between secessionist fighters and Cameroon military. Since 2016, the two English-speaking regions of the dominantly French-speaking country have been protesting for what they termed marginalization of the former West Cameroon territory. The protest soon degenerated into an armed conflict as the 87-year old President Paul Biya declared war against the self-proclaimed “Ambazonia republic” secessionist (a country which only exist on social media).

The current socio-political atmosphere in the South West and North West Regions characterized by ghost towns, lock-down, increasing insecurity perpetrated by the separatist has been giving the government sleepless nights. Legislative and Municipal elections were postponed twice in the heat of the crisis. When Mr Biya finally convened the electorate for February 9 twin elections, secessionist leaders mostly in the diaspora immediately promised hell vowing that elections will not hold in the restive English-speaking regions.

In his end-of-year message to the nation on December 31, President Paul Biya who was r-elected into office in 2018 in a contested presidential poll, declared that “security measures have been taken to ensure than all fellow citizens countrywide exercise their voting rights. Where necessary such measures will be ramped up.” With this declaration, the Minister of Defence, Joseph Beti Assomo effectively increased military presence in the South West Region by dispatching additional 350 troops ahead of the February 9 polls.

Minister Beti Assomo while receiving New Year wishes in Yaounde from the national defense corps on January 17, further called on the defence forces to be totally committed to secure the twin legislative and municipal elections. He said they have to translate into reality, instructions of the head of state that the elections have to take place in all constituencies of the country.
Meanwhile, securing the twin elections was not just an exclusive of the defence and security forces but also the prerogative of the Ministry of Territorial Administration. In the first semester Governors Conference, Territorial Administration Minister, Paul Atanga Nji handed down instructions to Regional Governors to mobilise security and defence forces under their command for a hitch-free election. “Governors and defence and security forces will do their job of securing the electoral process in the 10 regions in general and South West and North West in particular. In this effect, special measures are taken for the two regions,” Atanga Nji said during the conference that came weeks before the polls.

Concretely, Army Chief of Staff, Lieutenant General René Claude Meka accompanied by other top military personnel of the high command inspected security dispositions in the South West prior to the elections. The Army Chief of Staff told reporters in Buea, capital of South West Region that “At my level, I prescribed measures to be taken during the elections. The objective of my visit is to ensure the measures are effectively being executed.” The heavy presence of security and defence forces, the General noted, was a confidence building mechanism for the population of the south west region to exercise their civic duties.

On arrival of the 350 Gendarmerie troops in Buea on January 6, to beef up security in the south west before, during and after the polls, the Legion Commander, Colonel Henri Tchinda disclosed that their mission was to protect electors, candidates, Elections Cameroon staff and installations as well as the general public and property. The military equally played a crucial role in transporting electoral materials (ballot papers) to diffident localities of the region especially in the Bakassi peninsular where movement is practically difficult.

The heavy military presence was evident in all political rallies during campaigns displaying their artillery. Localities in Lebialem, Kupe Muanenguba, Meme, Ndian, Fakoand Manyu divisions could only be accessed with the aid of security escorts. One of the candidates, Dr Benz Bate Enow whose Cameroon Democratic Party (CDP) contested for the parliamentary and council seats in Manyu and Lebialem told this reporter in a telephone discussion that his team only succeeded to reach Mamfe thanks to the soldiers who escorted them. Dr Bate’s convoy came under attack from the separatist fighters who mounted road blocks with tree trunk but the soldiers of the Rapid Intervention Battallion (BIR), Cameroon’s elite force swiftly cleared the road for the opposition politician (member of G20 political parties who supported President Biya in October 2018 election). “I really appreciate our defence forces. In fact, I saw all what happened but thank God we finally got to Mamfe. What I can say is bravo to our defence forces,” he said.

Military Neutralises Seven in Bangem
The heavy militarization of the south west region during the just ended twin elections paid off in Bangem, Kupe Muanenguba Division where the military’s intervention pre-empted an ugly situation that would have happened in a polling centre. A group of armed separatist fighters were heading to the town to disrupt elections but were intercepted by youth of some villages in the Nninong clan area. Eye witness account say the youth took the fighters to the chief’s palace in Nninong and informed the administrative authorities in Bangem who immediately dispatched military to the scene. The armed separatist fighters had earlier in the night of the eve of elections attacked in Bangem but were overpowered by the military.

Manyu CPDM Bigwigs, Journalist Cheat Death
Ambazonia separatist fighters in the south west region multiplied their tactics in order to disrupt the polls. Apart from sporadic gunshots in major towns of the region which scared many voters on Election Day resulting to high abstention rate (over 70 per cent across the region according to unofficial trends from the polling stations), the armed fighters in Nguti subdivision had mounted several road blocks on the uncompleted Mamfe-Kumba Highway. They used tree trunks, large stones and other objects to mount road barricades. In one of the villages before Konye sub-division, Talangai, the CPDM convoy lead by the Minister of Special Duties at the Presidency, Victor Arrey Mengot and the Senate Vice President, Nfor Tabe Tando, both ruling party elite from Manyu Division came under serious attack from the separatist fighters. While the BIR elements who escorted them were clearing the tree trunks on the road using chain saws, armed separatist fighters in the nearby bushes were firing from their den guns. One of the journalists who cheated death in the crossfire between the military and the separatist fighters, Doh Bertrand reported that the gun firing lasted for about 45 minutes. Though no human casualty was recorded, the cartridges from the “Amba boys” as separatist fighters are commonly referred shattered screens of some vehicles in the convoy. Journalist Doh himself rescued by a BIR element who swiftly moved him into one of the military armoured cars saluted the bravery of the military and the dexterity in which they responded to the attack from the Amba fighters.